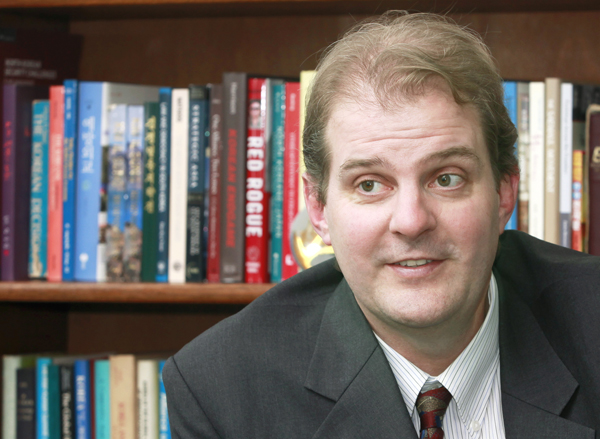 
Peter Beck, newly-minted representative of the Asia Foundation, said the international development organization has signed a memorandum of understanding with the Korea International Cooperation Agency (Koica) for projects in Sri Lanka, marking the first MOU between the state-run Koica and a foreign organization.

“We signed an MOU with Koica in December 2011 for a $500,000 project in Sri Lanka,” Beck said. “We also have a partnership with the Korea Development Institute to publish a book with them.”

Beck said the foundation will host a workshop with the state-run KDI in New Delhi in March, with senior officials from eight Asian governments scheduled to attend.

“We will facilitate dialogue about each country’s development experience, their change from an aid recipient to donor, and how to become a good aid donor,” he said.

It’s been about one month since Beck was inaugurated. Despite his wealth of knowledge about Korea, he described his first month as a “whirlwind.”

Beck visited Seoul in the 1980s while he was studying politics at the University of California, Berkeley. He said he became fascinated by the dynamic social changes and economic boom taking place in the country, which prompted him to change his major to Asian studies.

“I felt that Seoul in 1988 was one giant construction project,” he recalled.

“New buildings were going up everywhere, subway lines were being installed. In 1987, I could feel the vitality of Seoul, its dynamism, the economy booming, and I also saw students fighting for democracy, which really fascinated me. Witnessing Korea’s democracy and smelling the tear gas inspired me to study about Korea [instead of Japan or China].”

The nongovernmental organization, which has 17 local offices in Asia, has helped many countries in the region with their economic and social development. It also has a rich history of helping both Koreas, launching the first South Korean branch in 1954.

“We started right after the [1950-53] Korean War, helping [South] Korea recover from the war by helping the national library, national museums and institutes and newspaper companies start back up their operations,” Beck said. He said his first project involved getting standard textbooks ready for use in schools in 1954.

From governance and legal affairs to improving women’s rights, the foundation has engaged in a wide spectrum of important fields in South Korea. It donated musical instruments for the first performance of the College of Music at Seoul National University in 1955 and supported the development of the National Museum of Korea in 1967. In 1971, it also engaged in SNU’s 10-year development plan.

However, the foundation’s role has changed along with Korea, Beck said.

“We were a reconstruction and development organization in the 1950s and 1960s in Korea, and then we assisted with Korea’s economic development in the 1970s,” he said. “In the 1980s, we began shifting [our focus] to democratization. We were engaged in advising on the legal system here, making the new Constitution and new laws in the 1990s.

“As Korea evolved and transformed, the Asia Foundation also transformed its missions in Korea,” he said.

The foundation is also known for its famous program, called Books for Asia, sending 10,000 books annually to universities and institutes in North Korea, to engage and share information with them.

“For the past 20 years, we have been giving 10,000 books published by McGraw-Hill to North Korea each year. They go to the Grand People’s Study House, Kim Il Sung University, Pyongyang University of Foreign Studies,” he said. “We are trying to show that information is not dangerous, information is power, and it is possible to talk to America,” he said. “We also supported North Koreans who visit the U.S. and sponsored them to attend regional meetings.”

Beck said he does not see the North collapsing anytime soon. “I don’t see the transfer of power [to new leader Kim Jong-un] leading to instability,” he said. “The biggest challenge Kim faces is consolidating his rule, and the second challenge is to bring the prosperity,” he added.

He said Pyongyang’s decision to publish a letter by Syrian President Bashar al Assad on the front page of its party paper shortly after Kim Jong-il’s death in December could be a signal that the reclusive regime will crush any form of dissent with a brutal and bloody crackdown.

“[It was published] at a time when Assad was killing a lot of his own people,” he said. “That was very disturbing to me .?.?. they didn’t have to run it on the front page of the state organ. I would understand if the letter was sent from Russia, or China [but not Syria]. It was an ominous sign.”

Beck said he hopes to see the North take more positive action in the future by following in the footsteps of countries it has diplomatic relations with that are opening up, such as Burma.

“They are politically close to Burma, and Burma is changing [in a good way],” he said.

Beck said one of his top personal goals right now is to master Korean so he can read local newspapers to keep abreast of events and opinions. He said inter-Korean relations are also on top of his agenda.

“My dream, as a representative of the foundation, is to be able to combine separate projects about North Korea into one project, and to have programs of unification,” he added.