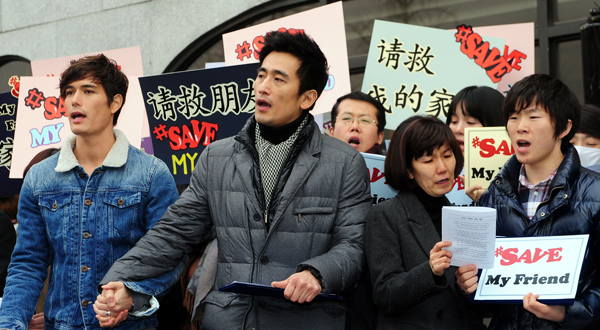 South Korean actor Cha In-pyo, second from left, with 30 other celebrities, delivers a speech during a rally against the Chinese government’s plan to repatriate North Korean refugees, near the Chinese Embassy in Seoul yesterday. The protesters called for China not to send the refugees back, saying they could be executed. [NEWSIS]


South Korea is considering taking issue with China’s forceful repatriation of North Korean defectors at a UN dialogue on human rights next week. Seoul is putting more pressure on Beijing over the hot-button issue despite concern over a setback in the 20-year bilateral relations.

“So far, we have urged the Chinese to send North Korean defectors to a third country with respect for their free will from a humanitarian point of view,” Ministry of Foreign Affairs and Trade spokesman Cho Byung-jae told a media briefing yesterday. “Adding to these efforts, we are considering raising this issue at the upcoming UN Human Rights Council.”

The United Nations Human Rights Council conference opens a four-week session in Geneva on Monday. South Korea has never raised the issue at the UN conference, although it has called for humanitarian treatment of North Korean defectors at the UN General Assembly.

The government may discuss inserting wording in a concluding statement at the conference that expresses the opposition to the forcible repatriation of the North Korean defectors, according to a diplomatic source. Seoul remains indecisive, however, as to whether it will mention China directly, the source said.

The move is a follow-up to Seoul’s plan to gain China’s cooperation on the issue with two international treaties of which China is a member.

A high-ranking official of the ministry said on Sunday that the government will start reminding China that it is required to abide by the 1951 and 1987 treaties banning repatriating refugees or others to territories where they would be put at risk of losing their lives or being tortured.

“We are dealing with the issue of North Korean defectors according to international law, domestic law and humanitarian principles,” said China’s Foreign Ministry spokesman Hong Lei during a media briefing, reiterating the country’s long-standing position.

Seoul’s divergence from its traditional “quiet diplomacy” toward China appears to reflect its increasing frustration with Beijing’s tilting toward Pyongyang over the recent years, in particular since the emergence of new North Korean leader Kim Jong-un, who is known to be cracking down on North Korean defectors.

A group, calling itself “people in the era of unification,” said in a statement yesterday that there are signs of a massive joint crackdown on North Korean defectors in recent months, with around 2,000 North Korean security agents and 7,000 Chinese agents observed to be dispatched to China-North Korea border areas.

Human rights advocates in the South and other countries are also stepping up pressure on China, specifically over China’s alleged plan to repatriate a group of North Koreans held in custody whose existence was disclosed this month. Both Beijing and Seoul are yet to confirm the exact number of the defectors in China put at risk of immediate repatriation.

Park Sun-young, a lawmaker with the Liberty Forward Party, who has long spoken out over the issue, embarked on an indefinite hunger strike yesterday, requesting China suspend the forcible repatriation of the defectors.

At a press conference during the rally, Cha In-pyo, a South Korean actor, said the celebrities gathered to represent the voices of many North Korean defectors who are afraid their public appearance would risk their families still in the North.