Yeosu Expo struggles with signage in other languages

Yeosu Expo struggles with signage in other languages 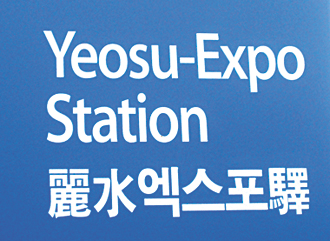 On a sign board at Yeosu Expo Station, the Chinese name of the station is misspelled, and a Korean word phonetically spells “expo.”

The sign bearing the name of the station located in Deokchung-dong, Yeosu, South Jeolla says the name of the city and the word station in Chinese characters, but uses Korean words for the part referring to the expo.

He looked around to find that the other signs and panels around the station were all the same. 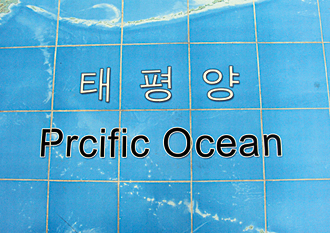 On a promotional sculpture set up at a plaza in the expo compound, ‘Pacific’ is misspelled as ‘Prcific.’ By Choi Kyung-ho

“I was dumbfounded to see that it only had information for the expo in Korean, not Chinese,” Li said.

Many people from China and Japan are expected to attend the expo that starts in the southern coastal city in May, but a Joongang Ilbo reporter found that many of the signs displaying information in major venues in the city lack Chinese or Japanese, the two languages expected to be heard the most, apart from Korean, during the three-month event.

About 250,000 Chinese and 150,000 Japanese are expected to attend the Yeosu expo. Organizers estimate they will make up approximately 73 percent of all foreign participants in the event.

The signs in question at the Yeosu Expo Station were put up in October last year. Im Su-seok, a senior official of the station, said they did so because they thought there wasn’t a Chinese word for expo.

“The use of Chinese characters is necessary for many foreigners who don’t know Korean,” said Son Wan-i, a professor of Chinese language education at Honam University in Gwangju. “Even though they are Korean words, the words should be written in a way that foreigners can understand.”

Some signs in the city are written in Chinese, but with misspelled ones including a sign referring to a meeting point at Yeosu Airport, about 30 minutes away from the train station. Among the four Chinese characters referring to the meeting point, one that was meant to be “a place” was a word meaning “to provide.”

Most of the street traffic signs are also written in Korean only or Korean and English, which observers say many Chinese and Japanese tourists would have difficulty understanding. Some English words are also misspelled including “Prcific Ocean,” not “Pacific Ocean,” on a global map installed in Jungang-dong, Yeosu.

The Yeosu municipal government was scheduled to change 297 of 1,500 information signs across the city before the expo opens. But, according to city officials, most of the changes are only to add the locations of and directions to expo facilities. Even the Expo Promotion Center, located in the main expo venue, has many signs only written in Korean.

Many of the foreigners attending the expo are also expected to travel in the region, but nearby tourist venues also had signs and panels in Korean only. Information needed for using services in the city was also predominantly Korean.

In reaction to the JoongAng Ilbo report, the Ministry of Land, Transport and Maritime Affairs said yesterday it would conduct a joint field inspection in Yeosu along with foreign language experts and the organizers, including the expo organizing committee and the city of Yeosu.

“We will try to correct the misspelling on the signs on the roads and train stations and ease the discomfort of foreign tourists,” the ministry said in a statement.