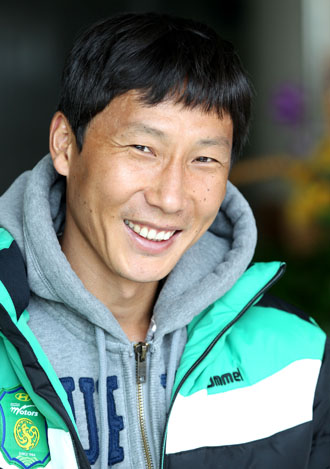 For the crucial Asian qualifier for the 2014 World Cup against Kuwait on next Wednesday, Choi Kang-hee, the national football team coach, has organized his squad mostly with veteran K-League players. In fact, the average age of the national team squad is 28, four years older than the previous squad.

Among the 25 members, the 36-year-old Kim Sang-sik is the main culprit who raised the average age set higher. In fact, he is the oldest field player (excluding goalkeepers) in Korean football history to play for the national team.

Kim, who made his professional with Seongnam Ilhwa Chunma FC in 1999, is one of the premier players in the K-League that experienced championship trophy often. So far, he has belted five championship title ? three with Seongnam and two with Jeonbuk Hyundai Motors. 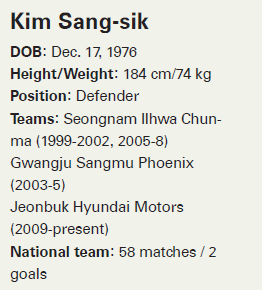 However, when it comes to the national team, Kim is heavily criticized by fans. As a defender or defensive midfielder, he was notorious for giving up silly fouls and pick up cards to spoil the game.

Kim’s career hit the bottom from the 2007 Asian Cup when he was caught for drinking without permission with other three players. Kim eventually received one-year ban from Korea Football Association.

He slowly geared up his reputation in the K-League with Jeonbuk from 2009 with coach Choi who was in charge of Jeonbuk that time. It seemed his national team career got into the end, but with Choi taking the helm of national team, Kim finally returned to the national team after five years.

Q. You are the oldest field player to play for the national team history. Do you really don’t have any problem on your stamina?

A. Honestly, I think more often than before that I should quit during the game (Laughs). When I was young, I just endured and play, but now I do feel some limit. But I can tell you there is no big problem.

Is there a special way that you maintain your stamina?

I’m the kind of guy who drinks special medicines like that. I just rest fully when I got a free time and try to avoid injury on the pitch. Having a well-regulated life schedule also helps. During the season, I always sleep at 11 p.m. and wake up 8 a.m. I work out three or four days in week before the team gets into trainings.

What was the reaction from your family when you were going to be in the national team?

My parents and in-laws looked me with respect since I was picked at this age, but my kids don’t recognize how great this is since they are young. My family will visit Jeonju to see the friendly game against Uzbekistan on Saturday and if I play, I want to show good performance.

Do you felt pressure when you joined the team?

At first, I thought it would be just happy when I can play for the national team, but now there is a pressure. I know coach Choi included me in the roster with some expectations. Competing with young players is not difficult, but I’m not sure if I can create good atmosphere within the team as a veteran, which is role that coach Choi wants from me.

You had some bad memories with the national team. Are you trying to restore your reputation?

I was reforming my image, but now I’m getting all the bad comments again because I rejoined the national team (Laughs). I watch some comments from internet such as “Why isn’t he retired?” or “Isn’t he old enough to walk with stick.” Now I can even enjoy watching these comments, but back in the past I wasn’t. I even suffered depression after 2007.

Do you think you can still play at the final round qualifiers for the World Cup?

If I play good against Kuwait, I think I can. Even if I don’t get much playing time, I think I have my role. I don’t have quick feet and good techniques, but I have my own ways to defeat the opponent. Until the day I retire, I need to show my eagerness to be with the national team.

If team gets qualified, are you looking to play in the 2014 World Cup in Brazil?

I haven’t thought that much far. But who would have expected that I’ll be back in the national team after five years? I think no one knows what will happen in the future.