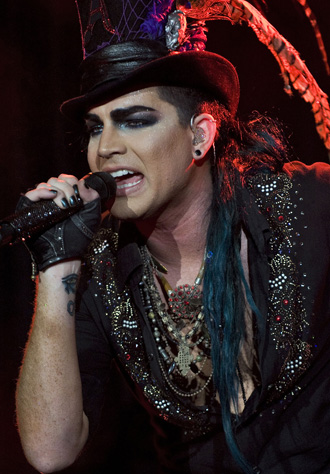 LONDON - Adam Lambert has nabbed his dream gig: Singing vocals for the iconic British band Queen as they headline the second day of the U.K. rock festival Sonisphere 2012.

The former “American Idol’’ singer-songwriter will step into the late Freddie Mercury’s shoes for the band’s July 7 set at Knebworth Park in Stevenage, north of London.

Queen’s Brian May and Roger Taylor confirmed the one-time collaboration Tuesday with Lambert, 30, a runner-up in season eight of the popular American TV song competition.

The Sonisphere show marks the third time Lambert has sung with the landmark band, following an eight-minute set at the MTV Europe Awards in November to celebrate Queen’s Global Icon Award, and a 2009 performance of “We Are the Champions’’ on “American Idol.’’

“It’s great, they are the coolest guys, they are so down-to-earth,’’ Lambert told The Associated Press in a recent interview in London.

“They are very sweet and just to be up there doing this music is such an honor. Freddie Mercury was a hero to me and his voice, his song writing and being gay, the whole package is amazing,’’ the American singer said.

Mercury’s final concert with Queen also took place at Knebworth in August 1986. But Lambert, who is also gay and theatrical, insisted he was not trying to take Mercury’s place.

“I in no way am trying to copy or mimic or replace Freddie or do what he did, that would be insulting to his memory and to the fans that hold him in such high regard,’’ Lambert said.

“I just am paying tribute. I am excited to sing the songs that he wrote and to try to give them some sort of flair that he would appreciate.’’