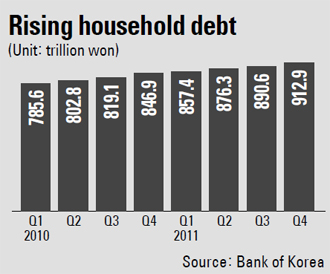 Household borrowing broke a new record as it exceeded 900 trillion won ($799 billion) at the end of the final quarter of 2011.

But more concerning was the significant increase in borrowing made in nonbanking institutions, furthering concerns that a sudden spike in debt defaults could trigger a financial crisis.

According to the Bank of Korea (BOK) yesterday, household loans in the fourth quarter reached 912.9 trillion won, up nearly 8 percent from the corresponding period one year earlier.

The total debt not only includes household lending but also payments made on credit cards as well as installment payments. 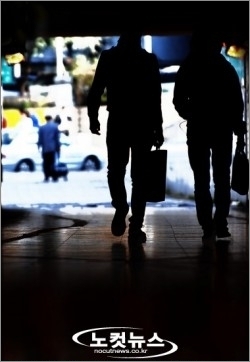 “Debt expansion in the fourth quarter was largely due to the seasonal factor,” said Lee Jae-ki, who works at the central bank’s statistics department. “Many people move to new neighborhoods in autumn, while spending also goes up at the end of the year.”

Household loans amounted to 858.1 trillion won, up 7.6 percent from a year earlier while loans made on credit card spending and installment payments surged 10.9 percent to 54.8 trillion won.

“The problem is that the growth of household debt in recent years has on average been outpacing the rate at which the economy has expanded,” said Park Deuk-bae, a researcher at the Hyundai Research Institute.

Although the quickly accumulating debt remains a major threat to the local financial industry, the alarming rate of borrowing from nonbanking institutions in the last quarter of 2011 is also setting off alarm bells.

This area saw on-year growth hit by 13 percent last year, exceeding bank lending as banks began tightening the liquidity tap for households in response to government prompts and fears of a snowballing debt crisis. Seoul has been leaning on them to curb lending since the third quarter.

Outside the banking sector, loans expanded by 7.9 trillion won to 186.8 trillion won from the third to fourth quarters. This level of growth was around 50 percent higher than seen in the previous quarter.

By contrast, banks expanded their loans by 5.7 percent last year from 2010. The figure grew by 9.2 trillion won from the first to second quarter. But as the government applied more pressure, new debt slowed to reach a total of 455.9 trillion won by year’s end.

This shows how loan seekers have been flocking to other sources such as savings banks and insurance companies rather than securing ways of living within their means. Most of the borrowers are low-income earners with poor credit rating seeking ways to meet their daily food and living expenses.

Experts have consistently warned that, while low interest rates could delay the impact of these loans, a protracted downturn could trigger a wave of sour debts that would threaten to cripple the economy.

Since last June, the central bank has maintained a loose monetary policy due to external uncertainties resulting from the sovereign debt crisis in the euro zone and heightened tension in the Middle East.

However, as inflationary pressure remains high and international commodity prices continue on an upward trajectory, the BOK is under intense pressure to raise its borrowing rate.