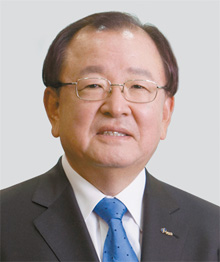 KDB Financial Group Chairman Kang Man-soo defended the gap between the administration’s economic pledges and execution yesterday, arguing that they were necessary to help overcome the effects of the 2008 global financial crisis.

Kang served as one of the chief architects of President Lee Myung-bak’s core economic policy pledges.

He refuted recent criticism that Lee reneged on his so-called “747 pledge” - 7 percent annual growth, $40,000 a year per capita income and the aim to become the world’s seventh-largest economy - which led to the president’s election, according to a spokesperson at Korea Development Bank, the flagship of state-owned KDB Financial Group.

At a symposium commemorating the 60th year of the Korean Economic Association on Monday, Kang noted that “in the face of the [2008] financial crisis, we pursued preemptive, clear and ample measures based on the experience gained from the economic crisis we underwent a decade ago,” referring to the 1997 Asian financial crisis.

“Korea overcame the [recent] crisis faster than any other OECD country through lowering interest rates, cementing currency swaps, cutting taxes and increasing fiscal spending,” he said, adding that “In trying to overcome the crisis, there was no time to spare to consider the ‘747 pledge’ that was the vision [of the current administration].”

With a year left of Lee’s five-year single term, criticism has been mounting from both inside and outside his ruling Saenuri Party that Lee failed to deliver on his core pledge.

Some have even called the “747 pledge” an example of populist vote wooing.

But Kang, who served as the first finance minister under the Lee administration from 2008 to 2009, refuted such claims.

He cited the fact that Korea stepped up from being the world’s 12th-largest to seventh-largest exporter between 2008 and 2010.

He also drew attention to the fact that it holds $300 billion in foreign currency reserves and overtook Japan in terms of its trade surplus for the first time in 2009, asserting that “despite criticisms at home, the world is envious of the resiliency of the Korean economy.”

Meanwhile, KDB launched its first-ever debit card product yesterday as part of its efforts to find new revenue streams in preparation for privatization.

Jointly created with Lotte Card, the bank hopes the new product will help expand its foothold in retail banking.

“[The card] will help raise the value of the company before privatization,” Kang said upon the debit card’s launch yesterday.

“We will carry out an initial public offering by the fourth quarter of this year at the latest.”