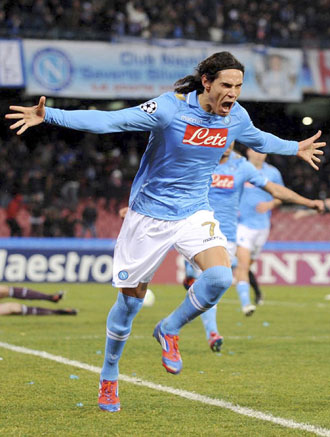 PARIS - Chelsea’s Champions League hopes are in the balance following a 3-1 loss to Napoli in the first leg of their last-16 tie on Tuesday, after Real Madrid were pegged back by a 93rd-minute equalizer at CSKA Moscow.

Chelsea took the lead through Juan Mata at Napoli’s Stadio San Paolo but a brace from the excellent Ezequiel Lavezzi and another goal from Edinson Cavani turned the tie in the Italian side’s favor ahead of the second leg on March 14.

Coupled with Arsenal’s 4-0 loss at AC Milan and early exits for Manchester United and Manchester City, Chelsea’s defeat raises the prospect of the quarterfinals being devoid of English teams for the first time since 1996.

“We should have defended better. A couple of mistakes against Napoli and you’re going to get punished,” said Chelsea coach Andre Villas-Boas.

“A 3-1 score is more difficult to recover from but not impossible with the amount of chances we get. The first 90 minutes have passed but we have 90 minutes to go to turn the tie around.”

Villas-Boas started with Ashley Cole, Frank Lampard and Michael Essien on the bench and his side quickly found themselves on the back foot, with Petr Cech saving sharply from Cavani and Christian Maggio early on.

It was the visitors who struck first, however, as Mata capitalized on Paolo Cannavaro’s miscued clearance to place a cool volley past Morgan De Sanctis in the 27th minute.

The Londoners could not hold out until halftime though, and two quick-fire goals put Napoli ahead.

Lavezzi equalized in the 38th minute by bending a low shot around Cech from the edge of the box and in first-half injury time, Cavani stole in front of Branislav Ivanovic to divert Gokhan Inler’s cross into the roof of the net with his shoulder.

Lavezzi dragged wide when well placed in the 55th minute but he made amends 10 minutes later, tucking the ball into an unguarded goal after Cavani had blocked David Luiz’s weak attempted clearance.

It could have been even worse for the 2008 finalists, but Maggio’s close-range effort in the 81st minute was blocked on the line by Cole.

“I’m disappointed about the goal we didn’t score through Maggio. It would have been an important advantage that we would have deserved,” said Napoli coach Walter Mazzarri.

“Now we’ll go and play for qualification in what will be a difficult game. We’ll have to score in London.”

Real Madrid remain favorites to reach the quarterfinals despite Swedish debutant Pontus Wernbloom rescuing a 1-1 draw for CSKA with an injury-time equalizer at a sub-zero Luzhniki Stadium.

Wernbloom, making his CSKA debut after signing from AZ Alkmaar in January, struck with the last kick of the match to prevent the Spanish champions-elect from recording their seventh straight win in the competition. AFP