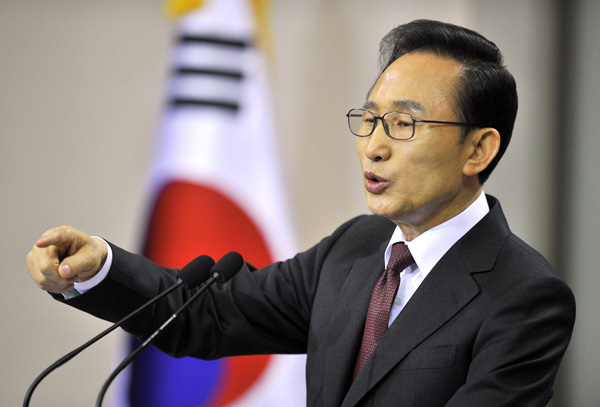 President Lee Myung-bak holds a press conference marking the fourth anniversary of his inauguration at the Blue House yesterday. [AP/YONHAP]


President Lee Myung-bak yesterday lambasted liberal opposition leaders with sharp criticism, singling them out by name and quoting their past remarks to challenge their recent protests against key government projects.

On the eve of the fourth anniversary of his inauguration, President Lee addressed the nation in a one-hour, live press conference yesterday morning. He gave brief opening and closing statements and spent most of the time answering journalists’ questions on various issues concerning politics, the economy and North Korea.

Lee spent nearly a quarter of his press conference attacking the liberal politicians’ “flip-flopping” on policies, citing their earlier support for the Roh Moo-hyun administration’s decision to pursue the Korea-U.S. free trade agreement and to build a naval base on Jeju Island.

Calling the projects the “right decision for the nation’s future, economic development and security,” Lee said he felt extremely frustrated with the opposition’s decision to withdraw its support from the programs it had once aggressively promoted for political gain in election season.

With the government’s efforts to improve the competitiveness of the livestock and agricultural industries, Lee promised to boost foreign investments in Korea, create jobs and increase business opportunities for small companies.

He also attacked liberal leaders for having changed their words from promoting the naval base construction on Jeju to pulling out their support of it.

“When she was the prime minister [of the Roh government], Chairwoman Han Myeong-sook of the Democratic United Party told the National Assembly in February 2007 that building the naval base was essential to nurture the Navy and protect the southern sea route,” Lee said. “Former Prime Minister Lee Hae-chan also said in July 2007 during his visit to Jeju that it was absurd to protest the base construction because Jeju is an island of peace. I truly agree with what they had said, but they are now disagreeing with it.”

Lee also quoted Rhyu Si-min, a co-head of the Unified Progressive Party, having said that it was not a contradiction that the naval base in Jeju would become an advanced base to defend the peace of the ocean.

Lee said the project is critical for the country’s economic and military security because about 400,000 Korean vessels use the Jeju Strait annually and it is necessary to defend the area as more traffic will occur as trade grows.

“We are depending on nuclear power generation to supply 30 percent of our energy demands,” Lee said. “Right now, Korea’s electricity price is one of the lowest in the world. If we give up nuclear energy, the price will go up by 40 percent.”

Noting that the country will pay 15 trillion won ($13 billion) more for electricity annually, Lee said nuclear power generation is the only realistic way for Korea to function.

“When Han was the prime minister, she had said Korea should aim to

become the country with the fifth-largest amount of nuclear power in the world,” Lee said. “And I agree. When we obtain 100 percent domestic technology to build our own nuclear power plant by the end of December this year, we will become the fifth largest in the world.”

Lee also told the politicians to accept that the Korea-U.S. free trade agreement, the naval base construction plan and nuclear power plants are not matters that can be disputed for political gain, asking the ruling and opposition parties to show bipartisan support.

In his closing remarks, Lee also said the ruling and opposition parties are making too many pork barrel, populist pledges without concrete plans to finance them.

“In any circumstance, I will respect the principles in the key policies that will decide the country’s interests and future,” Lee said. “I won’t do anything that will pass down burdens to the next administration. I won’t make an easy decision today which will eventually become a burden to the next generation tomorrow.”

While his opening and closing remarks did not include any mention of the recent series of corruption involving his relatives and aides, Lee addressed the issue in an answer to a question. Instead of offering a straightforward apology, Lee said he also felt very angry and frustrated over the situation. “No words can express my feeling toward the nation over this,” Lee said.

The liberal opposition parties furiously condemned Lee’s remarks made at the press conference. They particularly attacked Lee for having omitted a straightforward apology over the corruption scandals involving his relatives and aides. “The people expected a sincere apology, but what Lee said was impossible to understand,” said Shin Kyoung-min, spokesman of the Democratic United Party. “If he thought the retirement-home controversy was his fault, he should have said how he would legally and politically assume responsibility.”

Shin also reacted sensitively toward Lee’s decision to quote the party’s leaders’ past remarks to challenge their protests against the FTA and the Jeju naval base plan. “When the situation changes, it is the basic attitude of a leader to review the matter and discuss it again,” Shin said. “Rather than studying past remarks to pick a fight, Lee should review his policies to have a productive discussion.”