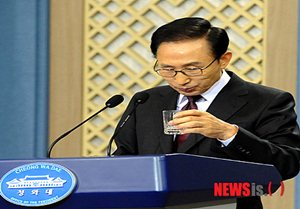 President Lee Myung-bak called on China yesterday to take a more lenient, universal stance on the issue of North Korean defectors, as China maintains a tough stance in dealing with North Koreans who were detained recently and face the risk of deportation.

“It is right to deal with North Korean defectors according to international norms unless they are criminals,” Lee said during a press conference in Seoul marking four years in office as president. “The [South] Korean government will continuously cooperate with the Chinese government.”

China is known to have kept dozens of North Koreans in custody in several places since early this month, according to human rights activists. A local civic group, People in the Era of Unification, claimed the number amounts to over 80.

Up to 100,000 North Korean defectors are estimated to reside in China looking for a chance to come to South Korea or other countries, and Seoul tried to secure their passageway to safety through behind-the-door diplomatic channels toward China. More than 23,100 North Koreans have defected to the South over the past several decades, the majority of them in the last 10 years, according to Seoul’s Ministry of Unification.

But, Seoul said recently it will try making additional efforts and call for more cooperation from China with its increasing obligation to the international community in reaction to the North’s and China’s tougher position on North Korean defectors.