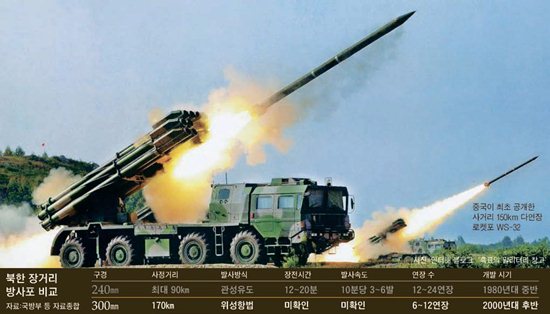 North Korea has developed a multiple launch artillery system with a range of 170 kilometers, (105 miles) in an apparent move to cover the new U.S. base moving south of Seoul, a government source exclusively told the JoongAng Ilbo Tuesday.

“North Korea has developed a multiple launch artillery system with a caliber of 300 millimeters, extending their range up to double the previous, from 90 kilometers from 170 kilometers,” the source said. “It seems that the North adopted Chinese military techniques and improved them.” 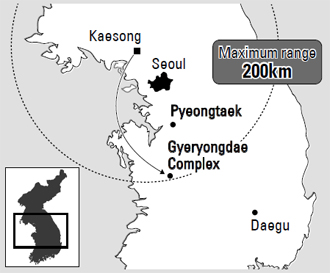 The source said the development of new artillery seems to target the upcoming U.S. base in Pyeongtaek, South Chungcheong, which will move from Seoul in 2016 to the southern city located 65 kilometers from the capital.

“The new artillery is the most threatening weapon to our military,” the source said. “North Korea seems to know the importance of extending the range of the artillery, so they it looks like they have imported Chinese weapons-making skills.”

In the mid-1980s, North Korea broke out its new, 240-millimeter artillery, which could reach Seoul, intimidating people living in the capital and other border regions.

The U.S. army stationed in the South was designed to protect those frontline regions from the base in Yongsan, central Seoul. But it recently determined to move it to the southern city of Pyeongtaek, to prepare for a war in a relatively safe region that is further from North Korea’s artillery attack. “If the range of the North’s artillery is extended, the meaning of moving the U.S. base is meaningless,” the source said.

The artillery can fire 12 shells at once in a moving armored vehicle, which makes it difficult for the South Korean army to figure out where they’re shooting from to stop them.

“When it comes to missiles shot from air strikes, it takes more time to reload missiles and we can detect them easier,” the source said. “However, the artillery attack is more difficult to defend against, because they take a hit-and-run strategy, with the armored vehicles moving quickly after firing.”

The source also said that the new artillery can reach out to Gyeryongdae Complex, where South Korea’s Army, Navy, and Air Forces are based, if they fire shells from Kaesong, a city close to the border. “As far as we know, the new artillery is longer than 3-meters and equipped with Russia’s GPS system, Glanass,” the source said. “The new artillery with the Russian navigation system can reach the target more accurately.”

The source said that North Korea has seemingly dispatched the new artillery weapons in its military.

“We were tipped off that the North just finished developing the 300-millimeter-round shell and dispatching it to the military,” the source said. “But we will see whether it is true or not.”