Rep steps down over false accusation

Rep steps down over false accusation

Independent lawmaker Kang Yong-seok, who accused Seoul Mayor Park Won-soon’s son of trying to dodge his compulsory military service, resigned from his position after raising the groundless rumors, as the son has proven his innocence through an open physical examination.

According to the Seoul Metropolitan Government, Park Ju-sin, 27, the son of the Seoul mayor, underwent an MRI on his back at 2 p.m. at Yonsei University’s Severance Hospital in order to clear himself of suspicion. Doctors and selected Korean media reporters witnessed the examination.

“We’ve concluded that the MRI picture we took today and the one Park had submitted to the Military Manpower Administration [MMA] are identical,” said Professor Yoon Do-heum, the chief of the Department of Neurosurgery at Severance, during a press conference.

Last month, Kang insisted that Park submitted a false MRI picture to the MMA in order to be exempted from his military duty, and said he would resign if he turned out to be wrong. 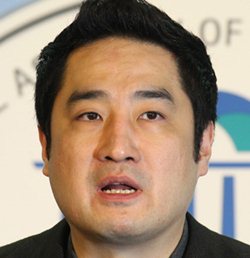 Park entered the Korea Air Force on Aug. 29 but was sent home three days later due to back pain. He underwent a lower back MRI at Jasaeng Hospital of Oriental Medicine in Sinsa-dong, southern Seoul, and submitted it to the MMA on Dec. 9, who eventually exempted him from military duty on Dec. 27 due to a herniated lumbar disc.

Kang insisted that the picture submitted to the MMA was not of Park, but someone who weighs more than 90 kilograms (198 pounds), is in his late 30s and has at least a 32-inch waist. Kang said that the subcutaneous fat in the picture was three centimeters (two inches) wide and that it was too thick to be Park’s.

He said that Park is 173 centimeters (five feet, eight inches) tall and weighs 63 kilograms. Mayor Park had been ignoring Kang for weeks, saying that the idea didn’t deserve even a passing glance, but decided to conduct the open physical examination after facing strong pressure.

Kang pushed Park to run the MRI examination, putting his position as a lawmaker on the line.

“We confirmed from Park’s MRI picture that the thickness of the fat is three centimeters,” Professor Yoon said. “We also confirmed that the shape of the abdominal muscles in the two pictures was identical.” The hospital also revealed that the son’s correct height is 176 centimeters and correct weight is 81 kilograms.

“The result shows that the accusation was only a political attack that aimed to harm the mayor’s reputation,” said Ryu Kyung-ki, spokesman of the Seoul Metropolitan Government.

“Kang should apologize to everyone who has gone through this ridiculous chaos,” Ryu added.