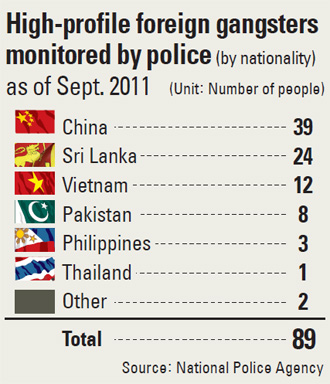 Last April, a nine-member Chinese gang was patrolling Daerim-dong in Yeongdeungpo District, southwestern Seoul - a location with a high concentration of migrant workers from China - to demonstrate its influence in the neighborhood.

The gang included a smaller group that operated an illegal hostess service for noraebang (singing rooms).

When the gang passed a rival business, the members barged in and beat up the Korean owner, a man surnamed Lee, 31, kicking and punching him while brandishing baseball bats and iron pipes, according to police. 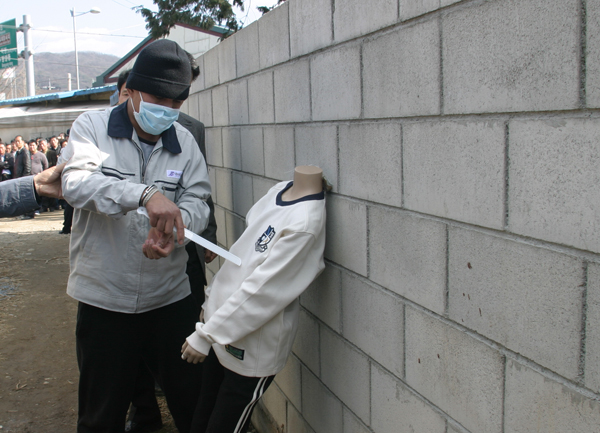 “J,” who was convicted of murdering a middle school girl in March 2008, recreates his crime for police at the crime scene in Yangju, Gyeonggi, in August 2008. J is currently serving a life sentence in Korea. Provided by Gyeonggi Bukbu Ilbo

“There are concerns that the groups could expand and become more violent,” he said, adding that, at this point, most gangs are relatively small in membership.

Some gangs use their influence to attack their own people or other migrant workers, Lee said.

In another incident from last April, 25 Sri Lankan gang members from Ansan, Gyeonggi, which has a large population of foreigners, were arrested for regularly beating up people from their own countries who refused to follow their orders.

One of those gangs also operated a money-lending business exclusively for Vietnamese. When some of the people failed to clear their debts, the gang kidnapped them or threatened their families back in Vietnam in order to be paid.

Lee said that in response to incidents such as these, the National Police Agency began tracking 89 foreigners recently categorized as “members of foreign gangs.” Most of those under surveillance belong to Chinese gangs, accounting for about 44 percent of the total, followed by Sri Lankans, Vietnamese, Pakistanis and Filipinos, Lee said.

He said that most of the 89 foreigners currently under surveillance are people who were called in for questioning but later released.

“We decided to keep an eye on them because there is a possibility that they could engage in more violence,” he said.

Fear about gang violence spread in late 2009, when a news report appeared listing by name 65 gangs involving about 5,000 foreigners from 14 countries operating in Korea.

The report prompted the National Police Agency, together with other related ministries and government organizations, to launch a three-month investigation into foreign gangs beginning in December 2009.

But through the investigation, the NPA found the news report to be false. According to Lee, the members of 22 of the 65 reported gangs had already been arrested by police, and evidence of the remaining 43 gangs could not be found.

“Most of the gang names that were mentioned in the article and about which rumors have arisen didn’t exist or they were the names of gangs or Yakuza active in their own countries,” Lee said. “Unlike Korean gangs, once foreign criminals are charged with a crime punishable by imprisonment, they are deported after serving a term in Korea.”

The NPA also discovered through its investigation that most crimes perpetrated by foreigners have been committed in four districts in Seoul and Gyeonggi, including Yongsan, Guro and Yeongdeungpo districts in the capital and Danwon in Ansan, Gyeonggi.

Of all crimes committed by foreigners in 2011, 3,432 of those convicted were from these four areas, which accounted for 12.7 percent.

“Those who formed gangs and got involved in fights using weapons such as knives and iron pipes were also mostly from the four areas, accounting for 22.4 percent of the total,” Lee said. “We also predict that 50 of the 84 foreign gang members that are under surveillance are from those four areas.”

Korea began attracting migrant workers in 1990s, and the number of foreign residents in Korea has been increasing ever since. According to the Korea Immigration Service, there are currently 1.4 million foreigners residing in Korea as of December 2011, up from 1.06 million in 2007.

The National Police Agency reported early this month that 26,915 foreigners residing in Korea were convicted of various crimes last year, up by 19.3 percent, or 22,543, from 2010.

It also said that 8,642 of the 26,915, or 32 percent, were suspected of five major violent crimes, including murder, robbery, rape, drug dealing and violence. Violent crime accounted for 90.6 percent of the crimes committed by the 8,642 suspects, the NPA said.

In one of the most violent incidents, 13-year-old middle school student Kang Su-hyun was found brutally murdered in an alley of her neighborhood in Yangju, Gyeonggi, on March 7, 2008. The suspect was an illegal migrant worker identified as “J” from the Philippines, who had been living in Korea for seven years.

According to Yoon Eui-gwon, the investigator at the Yangju Police Precinct who was in charge of Kang’s case, Kang was at home alone on the day of her death when J, who was frequently in Kang’s neighborhood to see a friend, dragged Kang out to an alley to rape her. But when Kang resisted, he stabbed her once in the back and 12 more times in her stomach, neck and chest with a kitchen knife.

Police said they thought it would be impossible to find the suspect but found a small bloodstain on the floor of a dormitory for migrant workers near Kang’s home.

J denied the crime at first but confessed when presented with the evidence. He is currently serving a life sentence at a prison in Korea.

“[On the day of my daughter’s death], my landlord’s daughter-in-law told me to go over there saying that the [victim] looked like my daughter,” Kang’s mother, Byeon Ih-yeon, said in an interview with Yonhap News Agency two weeks after Kang’s death. “I went there, and it was her. I can’t remember anything after that.”

The crime sparked a controversy among Koreans, who began criticizing major media outlets for leaving it out of their coverage, according to Cho Dong-hwan, the head of the Foreigners’ Crime Eradication Association.

“I heard that none of the major newspapers turned up to report on the case when police held an on-site inspection of the crime scene about a week after Kang’s death,” Cho said.

He said he was even more disappointed when he saw that there was so much attention given to the murder in Busan of a Vietnamese woman named Thach Thi Hoang Ngoc, 20. Ngoc was a marriage migrant to Korea but was murdered by her mentally ill husband on July 8, 2010.

“I express the most sincere condolences for her death, but considering the lack of media attention to the poor Korean girl, I felt angry at this country for such mistreatment of Korean citizens,” Cho said. “President Lee Myung-bak even apologized to the Vietnamese woman’s family and her home country, and other high-ranking officials followed, even as Kang Su-hyun was being neglected.”

In response to the crime, a petition was circulated on Agora, one of the country’s largest online forums, demanding that the National Assembly expand the size of the Korea Immigration Service, strengthen punishments for foreign criminals and revive the fingerprinting of foreigners, which was abolished in 2004 after demands from human rights groups that the practice violated the rights of foreign nationals entering Korea.

Netizens also organized a series of memorial gatherings for Kang and demanded stronger policies on illegal immigrants in Korea.

Some defended the lack of coverage of the crime by saying that it was proportional to the number of crimes committed by Koreans as opposed to those committed by foreigners.

Cho - who has a poster in his office that reads: “Multiculturalism: A policy of reverse discrimination” - insists that he is not xenophobic.

He argues, however, that the idea that the government is spending up to 200 billion won under the auspices of “multiculturalism” is “absurd.”

“Most foreign workers in Korea come to our land to eke out a living, which puts them in a situation where they are more tempted to commit crimes such as theft and robbery,” he said. “Currently, there are so many ordinary people in Korea who need to be protected by the government, but the government is neglecting its people while embracing foreigners.”

However, Gwak Jae-seok, from the Migration and Diaspora Research Institute, argued that as long as the government had decided to open doors for foreign workers, Korean people must also try to embrace them.

“We have opened our doors to foreign workers because the country needed these people. They did not just trespass into our land,” Gwak said. “Koreans must try to embrace them rather than forcing them to accept our culture. Otherwise, we could end up with more violent forms of resistance.”