Another standing ovation for the Netherlands’ RCO

Another standing ovation for the Netherlands’ RCO 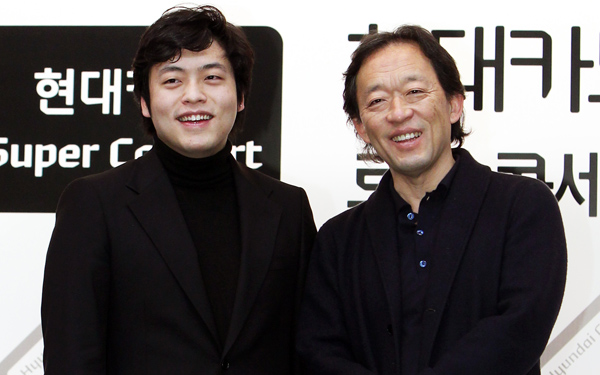 Pianist Kim Sun-wook, left, and Maestro Chung Myung-whun pose during a press conference on Tuesday at Hyundai Card headquarters in western Seoul for two concerts with the Royal Concertgebouw Orchestra of the Netherlands. Provided by Hyundai Card


‘When my turn to play came, the orchestra tuned down the volume to an extraordinary degree.’ - Kim Sun-wook

Before beginning a relatively lengthy encore piece with the Royal Concertgebouw Orchestra - Weber’s overture to the opera “Der Freischutz” - Maestro Chung Myung-whun encouraged the packed Seoul Arts Center on Wednesday night to give applause that the Dutch orchestra would never, ever forget.

After the final note of the nearly 10-minute-long work, delighted yet somewhat overwhelmed smiles wouldn’t disappear from the faces of the orchestra as audience members rose to their feet with roars of approbation.

The orchestra performed sophisticated harmonies with the overture as well as with two main repertoires - Brahms Symphony No. 2 in D Major, Op. 73, and Beethoven Piano Concerto No. 3 in C minor, performed with up-and-coming pianist Kim Sun-wook.

The RCO is already praised as one of the world’s top orchestras. It was able to demonstrate its elite status in Seoul after having already played 11 concerts on the tour that brought it to Korea.

Chung had accompanied the RCO as a guest conductor from Amsterdam to Hong Kong, Shanghai and Beijing.

The two-day concerts on Tuesday and Wednesday in Seoul, part of the Hyundai Card Super Concert series, marked the fourth visit for the orchestra to Korea. Its first was in the 1970s, which was followed by performances in 1996 and most recently in 2010.

Pianist Kim performed beautifully. The sincere and profound musician certainly discerned himself from those prodigy-turned-pianists in Korea that focus too much on technique and showmanship. The 25-year-old was coming to his home stage after a one-year hiatus at the Royal Academy of Music in London where he studied conducting. He found the international spotlight after winning the Leeds Competition at the age of 18 to become the competition’s youngest winner in 40 years and its first Asian first-place finisher.

Kim said at a press conference on Tuesday at Hyundai Card headquarters in western Seoul that his favorite composer is Beethoven and the piano concerto No. 3 is the one he has “performed most and is confident about playing.”

Kim had only positive things to say about playing alongside the RCO.

“When my turn to play came, the orchestra tuned down the volume to an extraordinary degree. The string part, in particular, [is so good that it] makes me feel it is played by a single person,” he said.

“I was also impressed to find that the orchestra tried to retain balance by not going after my direction but by going the opposite way, when an ordinary orchestra usually kept it a rule to follow my lead.”

Starting March 29 and through November, Kim will hold a series of recitals during which he will play the entire cycle of Beethoven sonatas.