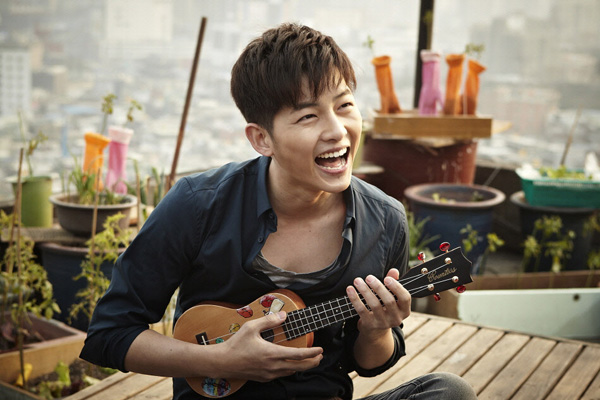 Twenty-something Chun Ji-woong (Song Joong-ki) is an unemployed deadbeat living in a tiny room that he manages to get kicked out of because he can’t pay the rent. He lives off an allowance from his mother, who runs a small restaurant in the countryside, and continuously fails job interviews. Even in this dire situation, the ever-optimistic Ji-woong almost lands a girl but has to forgo a night of pleasure because he is 50 won (4 cents) short of buying a pack of condoms.

The girl, Gu Hong-shil (Han Ye-sul), thinks romance is a luxury, an unnecessary frivolity and is the last thing on her penny-pinching mind. She’ll walk anywhere within 10 kilometers ( 6.2 miles) to save on bus fare and runs like lightening whenever she spots an empty beer bottle that she can turn in to the recycling center for a few cents. She spots an opportunity in disguise when she meets Ji-woong and involves him in a short-term money-making scheme.

It is quite rare to see a romantic comedy that portrays the characters’ struggles with money so bluntly and out in the open. In the place of a confession of love in the rain, Ji-woong and Hong-shil’s big romantic date is a long walk from Hannam Bridge to Seongsan Bridge, topped with a soju (rice liquor) and grilled samgyeongsal (pork belly) dinner.

The idea of this movie, which attempts to tackle problems with youth unemployment and poverty in the form of a romantic comedy, was quite intriguing at first. However, the main problem with “Penny Pinchers” is that it can’t decide what kind of film it wants to be.

For one thing, the way that the romance develops between Ji-woong and Hong-shil is painfully formulaic and predictable. The girl sees the guy and finds him annoying at first, but gets involved in some sort of situation with him that forces the two to interact and in the end - surprise - they get together.

The more interesting part of the story lies in the characters’ struggles as disillusioned twentysomethings trying to fit into society and make a living for themselves.

But ultimately, these subjects get buried in the utter pointlessness of the central romance and, at most, act as just another distraction tactic, a cheap curve ball in an attempt to develop some sort of plot and keep the story alive. It almost felt like these issues were used by the director as a mere replacement for the more commonly used rom-com twists like a past lover or some family situation, delaying the romance between the central characters for a bit longer.

One of the few bright spots of the film was newcomer Song Joong-ki, whose colorful performance as the goofy loser Chun Ji-woong went seamlessly back and forth from slapstick comedy (surprisingly not as irritating as I thought it would be) to a swoon-worthy leading man with a viable presence.

But even the charismatic Song couldn’t save this wreck of a film from splitting like oil and water into two uncomplimentary paths.