When veteran detective Jo Sang-gil (Song Kang-ho) investigates the case of a man who burned to death in a car, he is reluctant to take it at first because its not likely to win him a long-desired promotion. But when his partner Cha Eun-young (Lee Na-young) discovers bite marks on the body, the two investigate further. As additional evidence comes to light, they discover that the victim was involved in a prostitution ring.

As the investigation continues, it becomes clear the two detectives are a study in contrasts. Jo is a middle-aged man whose wife left him to take care of his teenaged son, and Cha is a smart, young investigator who has cultivated a somewhat cold exterior to shield herself in her largely male work environment.

The two are forced together through the case, which continues to spiral out of control when another murder is committed. The new victim has bite marks similar to those found on the burned corpse, pointing to a connection between the cases. This time the evidence leads to a retired police dog trainer who lives with his drug addict daughter and provides the missing link.

“Howling” is based on Asa Nonami’s novel “Fang Freezing.”

The film tells the story of professor Kim Kyung-ho (Ahn Sung-ki), who was fired from his job when he challenged the validity of a math question on the Collage Scholastic Ability Test in 1995.

After losing his job, Kim launches a lawsuit against the university but loses. Days after the ruling is handed down, Kim, with crossbow in hand, goes to the home of the judge who presided over the case. The two men fight until a security guard breaks them up. The judge, who has kept one of Kim’s arrows, calls the police to have his attacker arrested. When the police arrive, the judge claims Kim shot him as Kim maintains his innocence.

Prior to the film’s release, the professor depicted in the film, whose real name is Kim Myeong-ho, wrote a book about the trial, with details about his life since he was released from prison on Jan. 23 after serving a sentence of four years and 10 days.

The grief of losing a loved one is strikingly painful, but imagine being able to bring someone back from the grave should the worst happen. “Womb,” directed by up-and-coming Hungarian Benedek Fliegauf, turns the human life cycle on its head by using such a tragic death for momentum to tell the story of how technology could find a place in the creation of human life.

The childhood home of Rebecca (Eva Green) and Tommy (Matt Smith) is an unlikely setting for a modern science-fiction tale, with its whitewashed cottages and isolated residents more reminiscent of the pre-computer era. The story, too, begins mysteriously, but with hardly a hint of the scientific controversy to follow.

Yet it’s actually the unlikely setting - along with the very human feelings shown by the grieving characters - that makes the introduction of such a modern technological element so successful. Moviegoers can sometimes dismiss films about science that has yet to come into real-life use as being too fantastic or merely included for entertainment value rather than for more substantive reasons. But that doesn’t happen here. “Womb” goes to pains to reveal the full story slowly, almost teasingly, to give plenty of time for real contemplation.

Kate Beckinsale pulls on her black latex suit for the fourth time as she reprises her role as vampire Selene. This time she’s in 3-D and directed by Swedes Mans Marlind and Bjorn Stein, who replaced Len Wiseman, director of the previous “Underworld” installments and Beckinsale’s real-life husband.


The movie starts with Selene being released from human captivity after 12 years of imprisonment in Antigen, the corporation aiming to create a virus-killer that will wipe out the entire world population of vampires and lycans. Upon being freed, Selene begins having mysterious visions she believes will lead to her lover, the half-lycan, half-vampire Michael Corvin.

Eventually, these visions lead Selene to discover her injured daughter Eve, whose father is Michael and is also a vampire-lycan hybrid. What follows is a wild, mindless ride filled with weapons, blood and violence against a soundtrack of Evanescence and Linkin Park as Selene rushes to save the vampire race from extinction. 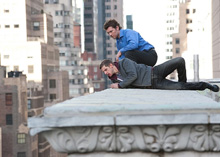 “Man on a Ledge” is about a man named Nick Cassidy (Sam Worthington) who checks into a hotel and prepares to throw himself off a ledge on the top floor - but there is more to this scene than meets the eye as police surround the building and the story of a jewel heist unfolds and untwists.

Another reviewer pointed out that “the ledge is the movie’s most dynamic performer.”

To love or loathe is the question when it comes to Margaret Thatcher. Plenty of people do both. Still known in working-class areas up and down the U.K. as the “milk snatcher,” courtesy of her spending cuts that included abolishing free milk to school children between 7 and 11, the Iron Lady has come to mean different things to different people.


In Phyllida Lloyd’s biopic, Meryl Streep plays the Iron Lady in her most recognizable incarnation, as a formidable politician and uncompromising prime minister. The film jumps around between periods of her life but is set in the present with memory triggers throwing both Thatcher and the audience back to various episodes in her life, including her younger days, meeting her husband and leading the U.K. into a war with Argentina. The Observer’s film critic Philip French criticizes the script, written by Abi Morgan, of lacking depth and ultimately touching on too many incidents without analyzing any of them. Meryl Streep’s performance will bring shivers to the spines of any former miners who dare watch it as it is eerily accurate.

In Thatcher’s heyday in working-class strongholds like Liverpool, school children could be heard singing songs about the Iron Lady that were less than complimentary - perhaps because of a calcium deficiency.