Jennifer Aniston puts name in star on Walk of Fame

Jennifer Aniston puts name in star on Walk of Fame 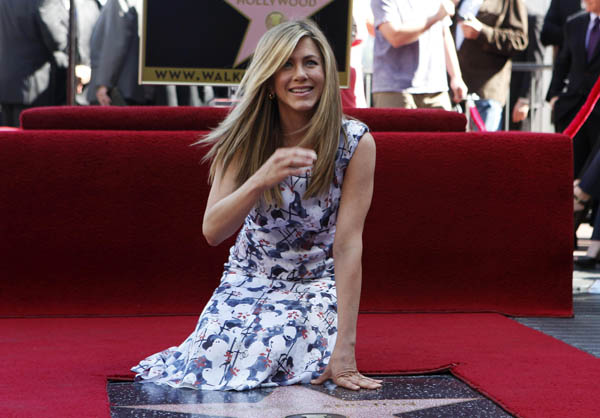 LOS ANGELES - Actress Jennifer Aniston was honored with a star on Hollywood’s Walk of Fame on Wednesday, the first of the “Friends” actors to receive the emblem of celebrity that she described as “surreal.”

“I was born in Sherman Oaks, California. I am a California girl through and through, and I’m sure this is always just sort of been in the back of my mind,” said Aniston at the ceremony.

“It probably wasn’t even a dream, it was one of my wildest dreams. I don’t think that I ever even thought that this would be here, this day. So I am utterly humbled and grateful,” the “Friends” actress told her fans and friends.

Aniston was joined by her father John Aniston and “Wanderlust” co-stars, including boyfriend Justin Theroux, as she received her star.

Her “Just Go With It” co-star Adam Sandler was on hand to deliver some wisecracks to the crowd, referring to Aniston’s universally coveted hairstyle and her role in 1993 horror film “Leprechaun.”

“She prayed for three things: to have everyone in the entire world be fascinated with her hair, to one day star in a movie about an evil leprechaun who kills people, and most importantly, receive a star on the prestigious Hollywood Walk of Fame. Well, today, Jennifer, the trifecta is here,” quipped Sandler.

Aniston, 43, rose to fame in the role of Rachel Green in the hit 1990s sitcom “Friends,” for which she won a Golden Globe and Emmy award.

After “Friends” ended in 2004, Aniston made a successful transition into films, with roles in the critically acclaimed “The Good Girl” and “Derailed”

The actress will next be seen in comedy “Wanderlust” with Paul Rudd, Malin Akerman and Theroux, out in U.S. theaters on Friday. AFP