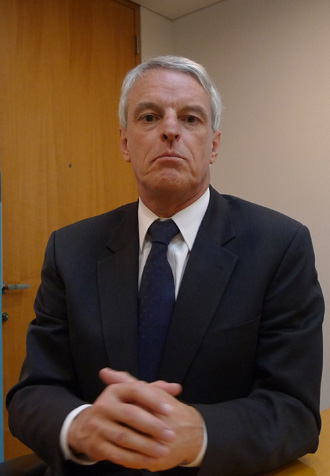 Korea’s property market and economy will see exceptional growth once confidence is restored in financial markets and the debt debacle in Europe is resolved, according to Colin Dyer, president and CEO of Jones Lang LaSalle, a major global real estate services firm.

He said foreign investors are showing significant interest in the Korean market as it harbors globally competitive companies and brands including Samsung Electronics and Hyundai Motor.

“In the first quarter, you have got a stronger economic growth picture in the U.S., job growth in the U.S., and you’ve got Europe beginning to address its problems,” Dyer said in an exclusive interview with the Korea JoongAng Daily. “So the confidence factor [will] have a short-term impact [but] a positive effect in the near future.”

Dyer, who arrived in Seoul earlier this week as part of an Asian swing, said that as euro zone concerns ease, underlying growth, consumer and business spending, and investment will be carried out in a healthy way across the Continent.

“A lot of progress has been made [in Europe] over the last six months,” he said. “All of that builds confidence.”

He said Korea has not disappeared from the international radar. “It is [still] an attractive market, because it is a solid growth economy with internationally competitive products and brands,” he said. “Seoul is a market where there is a good level of capital, good depths of market, so if you make an investment, you can always rely on being able to sell it.”

According to the Ministry of Land, Transport and Maritime Affairs, foreign investors’ ownership of local property has been growing steadily since the government opened up the real estate market in 1996. Last year, foreigners owned 229 million square meters (56,587 acres) of property. Koreans with foreign passports accounted for half of this, and joint corporations some 35.7 percent. Of the total foreign ownership, Americans had a 57 percent stake, followed by Europeans with 14 percent, Japanese with 8.7 percent and Chinese with 1.8 percent.

Nonetheless, the total amount still only represents 0.2 percent of all property in the country, and most of their holdings were concentrated in the greater Seoul metropolitan area.

Dyer said this does not mean interest from foreign investors is low. He said the biggest obstacle for them in purchasing real estate here is the strong competition from local companies. “Many Korean companies still want to own the property that they occupy,” he said, adding that firms in other developed countries tend to reinvest the capital they have tied up in real estate into their core businesses.

“As markets mature, we see companies selling their real estate,” he said. Dyer said the business environment will improve with more foreign capital. “One of the things foreign capital is looking at is, ‘What’s my return?’ which means transparency, a low level of bureaucracy, a low level of corruption, and a good legal system, which can protect them .?.?. [it] helps Korea to open up its real estate market, makes it more transparent [and] more attractive internationally.”

Dyer advised foreign institutional investors to first formulate medium- to long-term strategies based not only on profit, but also on giving back to local communities and society.

“It’s not just about making money. When you buy an asset, you have to look after it, and hopefully improve it.”