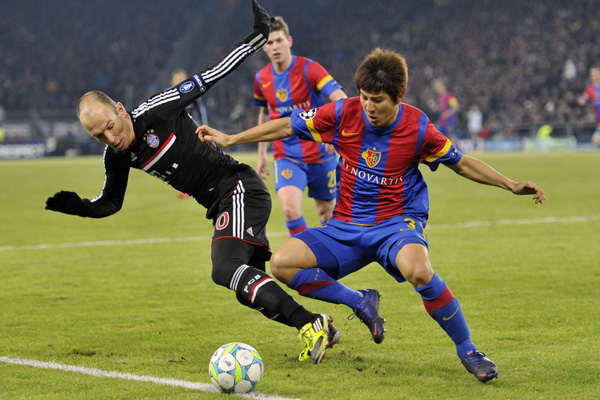 Having beaten Manchester United in the group stage to reach the second round, Basel twice hit the frame of the goal before substitute Valentin Stocker hit an 86th-minute shot through goalkeeper Manuel Neuer’s legs.

The second legs of both matches are scheduled for March 13.

Bayern is in a poor run of form that has dropped it to third in the German league. That run now threatens its involvement in Europe’s premier club competition and - unlike when United was knocked out of the group stage - there is no consolation of a Europa League place if it is eliminated.

The May 19 final is set to be held at Bayern’s Allianz Arena.

“The alarm bells are going to be ringing,’’ Bayern coach Jupp Heynckes said. “We’re not in an ideal position for the return game. We need to start winning.’’

Basel showed the same fearlessness that helped it to a 3-3 draw and then a 2-1 win over Manchester United in the group stage, threatening Bayern’s goal and giving its opponent several chances on its own.

Basel goalkeeper Yann Sommer made a string of saves at noisy St. Jakob Park stadium, starting early with a close-range block against France winger Franck Ribery. Sommer denied Ribery again with a diving save in the 11th minute before.

“We had two huge chances early on,’’ Heynckes said. “It’s important to take those chances so you can be relaxed approaching the rest of the game.’’

Neuer tipped away a flick by Marco Streller, pushed Aleksandar Dragovic’s header against the post and, after Basel forward Alex Frei swept a left-footed shot from 10 meters against the bar, saved a long-range effort by Shaqiri.

Shaqiri is set to join Bayern in the Bundesliga next season in a reported 11.6-million-euro ($15.3-million) transfer.

Jacques Zoua, on as an 83rd-minute replacement for Shaqiri, set up Stocker for the winning goal.

A badly out-of-form Inter side looked to have done enough to secure a draw in France, but Ghana striker Ayew timed his run perfectly to meet a corner kick in the third minute of injury time and head the ball firmly past goalkeeper Julio Cesar’s outstretched hand.

The goal sealed Inter’s sixth defeat in seven games and increased the pressure on beleaguered coach Claudio Ranieri, who insisted his side can still progress.

“We played well, we had good counterattacks, we had more opportunities and they scored on their first chance,’’ Ranieri said. “We can score two goals, no problem.’’