Tiger survives, Donald out in day 1 of Match Play

Tiger survives, Donald out in day 1 of Match Play 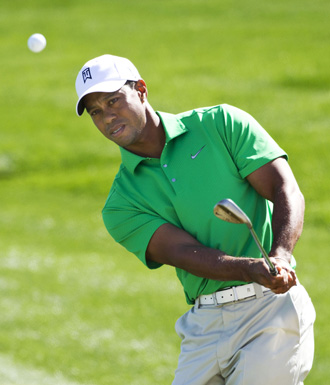 Tiger Woods chips to the green during a first-round match at the WGC Match Play Championship golf tournament on Wednesday in Marana, Arizona. [AP/YONHAP]

MARANA, Arizona - Defending champion and No. 1 seed Luke Donald crashed out of the Match Play Championship in the first round Wednesday, beaten by Ernie Els on another predictably crazy day at Dove Mountain.

Els, who only got into the 64-man field when Phil Mickelson took his family on vacation, won 5-and-4 to make Donald only the third No. 1 seed to exit at the first round in the event’s history.

“I don’t think it would have mattered who I played today. I just didn’t play well,’’ Donald said.

“I struggled. I gave away too many holes and made too many mistakes. You can’t do that in match play against anyone, let alone Ernie.’’

Tiger Woods nearly found that out against Gonzalo Fernandez-Castano.

Woods had to play left-handed in one of his three journeys into the desert. He trailed the Spaniard with four holes to play, and both of them looked beatable.

That changed when Woods drove the par-5 15th green to win with a two-putt birdie, won the 16th with a par and then closed out the Spaniard with an 8-foot par putt for a 1-up win.

“We both made our share of mistakes, there’s no doubt about that,’’ said Woods. “But somehow, I was able to move on.’’

That was the only objective in this World Golf Championship, a single-elimination format in which the only proper use of the word “upset’’ is the mood of the 32 guys who are headed home.

Ian Poulter, the Match Play winner two years ago, suffered his worst loss in nine appearances when Korean Bae Sang-moon beat him, 4 and 3.

Bill Haas, coming off that monster win at Riviera just three days ago, looked like a winner when he was 1 up on the 17th green and had a 5-foot birdie putt. Ryo Ishikawa holed from 18 feet, Haas missed, and the Japanese star made par on the 18th to win.

The other top seeds didn’t have too many problems, although U.S. Open champion Rory McIlroy had a nervous moment.

He won four straight holes on the back nine to seize control against George Coetzee and was 3 up with three to play when McIlroy lost the next two holes with bogeys, then popped up a tee shot and made par a challenge. Coetzee, however, blew his approach some 60 feet long on the 18th and three-putted for bogey, giving McIlroy a 2-up win.

Lee Westwood never trailed in his 3-and-1 win over Nicolas Colsaerts of Belgium. The test for Westwood comes on Thursday against Robert Karlsson, when he tries to advance to the third round for the first time.

McIlroy and Westwood now have a chance to replace Donald at No. 1 in the world if either were to win this week. AP