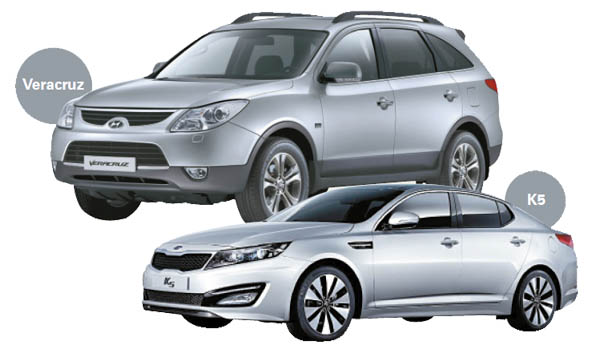 Lee Seong-moo, a 30-year-old white-collar worker, got an unpleasant surprise recently while browsing through automobile brochures when he discovered that the model he was planning to buy had jumped in price without what he considered due merit.

“The car I had in mind was Kia Motors’ K5, and the automaker seems to have raised its price after changing the engine,” he said. “In my opinion, the modification wasn’t necessary.”

Lee is not alone in feeling annoyed at what are seen as unnecessary or exaggerated price hikes of domestically made vehicles.

Internet blogs and consumer group sites have been lighting up lately with complaints and criticisms from the public after slight modifications in some cars’ specifications have resulted in weightier price tags that they argue are disproportionately high.

“What kind of options cost this much?” and “Automakers are definitely not consumer friendly” are fairly representative postings that highlight the level of discontent now spilling onto the Web.

Kia Motors, the country’s second-largest automaker, recently released an upgraded model of its midsize K5 sedan, loading a new NV engine and adding more specifications, such as a rear parking assistance system. With the changes, the price of the sedan rose 650,000 won ($575).

Renault Samsung also increased the price of its All New SM7 sedan by at least 100,000 won, and as much as 620,000 won, after upgrading its specifications, including by adding new leather seats. The price was raised just five months after the vehicle was first rolled out last August.

Now consumers like Lee, who are battling raging inflation, a liquidity squeeze on household loans from banks and other unsavory economic conditions are saying enough is enough.

“As the prices of daily necessities have shot up, monthly income earners are already finding it harder to make ends up,” he said. “Now carmakers seem to be joining the list of factors adding to this inflationary pressure.”

The economic slowdown has led consumers to tighten their wallets, especially as the surge in consumer prices since early last year has not gone unnoticed.

Furthermore, there is little respite on the horizon as Korea’s economic outlook looks fairly grim this year, hindered by the euro zone debt crisis and a lack of growth momentum in the U.S. and Japan.

With Kia raising the prices of its K5 models by around 500,000 won, automakers argue that such moves are necessary in order to enhance their competitiveness by offering consumers more options while still staying in roughly the same price band.

“Our products have become more competitive, not only in Korea, but also overseas,” said an industry official.

Meanwhile, unlike domestic carmakers, importers are lowering the prices of their products as part of efforts to increase their market share here.

German automaker Volkswagen also recently released its new Scirocco coupe for 42.2 million won, which is lower than the price it sells for in Europe, according to the company.

Last year, car importers sold a record 100,000 vehicles in Korea, leading them to raise their combined target for 2012 to 120,000, according to the Korea Automobile Importers & Distributors Association (Kaida).

“Importers are lowering their prices to expand their presence in the local market, which has long been dominated by domestic automakers,” said an official from Kaida.