Who dares wins - but not in tablet war

Who dares wins - but not in tablet war

Where have all the iPad killers gone?

After Steve Jobs, the late co-founder of Apple, unveiled its iPad in 2010, the company’s competitors have rolled out a steady stream of gadgets in what now appears like a futile attempt to knock Apple off its perch.

Samsung’s Galaxy Tab, Motorola’s Xoom, Research in Motion’s BlackBerry PlayBook and Hewlett Packard’s TouchPad were all hoping to be the next big thing and stop iPad from gobbling up the global market, but none have even come close to putting up a decent fight. 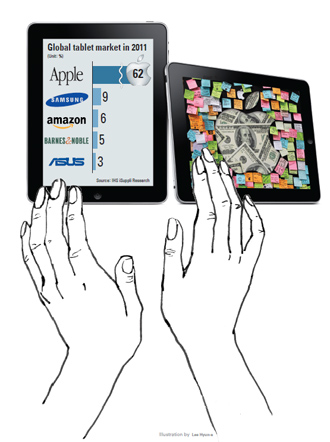 Media reports predicted the so-called “tablet war” would intensify in 2011 as manufacturers ambitiously rolled out their own devices at the Consumer Electronics Show in Las Vegas, but this proved something of a false alarm as the iPad’s dominance remained impregnable.

While the California-based tech giant shipped a combined 40.4 million iPads and iPad 2s last year, the gap between the market leader and runner-up was huge given that Samsung shipped 6.1 million of its Galaxy Tabs over the same period.

Although Apple saw its huge lead narrow to 57 percent in the fourth quarter, down from 64 percent in the preceding three months, it was still streets ahead of the competition in terms of luring consumers.

In the end, researchers said, its biggest competitor was itself.

“Shipments of the iPad line fell short of IHS estimates in the fourth quarter as many loyal Apple customers devoted their dollars to shiny new alternatives,” said Rhoda Alexander, senior manager of tablet and monitor research at IHS.

“However, the primary alternative wasn’t [Amazon’s] Kindle Fire - which debuted to solid sales in the fourth quarter - but Apple’s own iPhone 4S. The rollout of the iPhone 4S in October generated intense competition for Apple purchasers’ disposable income, doing more to limit iPad shipment growth than competition from the Kindle Fire and other media tablets.”

Meanwhile, some of the tablet makers have already become casualties of the brief but ongoing tablet war.

Last August, Hewlett Packard announced that it would be discontinuing its TouchPad, citing disappointing sales, not long after the product hit stores in July.

In a bid to shift its remaining stock, the company resorted to the humbling measure of slashing the retail price of its 16GB version to $99.99 from $399, which triggered a mad dash from the public to exploit the bargain-basement deal.

Meanwhile, market analysts described RIM’s BlackBerry PlayBook tablet as “dead on arrival” when it was released last April as it lacked a native e-mail client. Before long, customers were echoing similar sentiments.

“I bought the PlayBook because I really liked the BlackBerry smartphone’s extensive e-mail capabilities,” said Yeo Hee-soo, who works for a nonprofit organization in New York. “But it turned out to be nothing like the smartphone at all. Whenever I need to access my e-mail with the PlayBook, I have to tether it to the handset.”

Yeo criticized the fact that the product was rushed into production simply to try and keep pace with Apple.

“Compared to Apple, which is excellent at leading new trends and creating a buzz by bringing out products that go beyond what people expect or can even imagine, the Playbook simply wasn’t powerful enough,” he said. “It just had the latest hardware, but users found it wasn’t convenient enough.”

Sarah Rotman Epps, an analyst at Forrester Research, was quoted as saying by Wired Magazine that iPad challengers must learn from their own, and other’s, failures so as not to lose customers like Yeo in the future.

“Motorola, Samsung, RIM, HP and all the rest put premium price tags on half-baked products, and consumers rejected them,” Epps said. “Achieving success in the field of tablets is not about 4G, quad-core chips, or the Ice Cream Sandwich OS. It’s about demonstrating the value, utility and wonder of the device.”

On a more positive note for those who do not profit from Apple’s gains, Amazon’s Kindle Fire and Barnes & Noble’s Nook tablet are finding their own successful markets. And with its remarkable growth, the Kindle Fire is already being dubbed by some industry watchers as an “iPad killer.”

After it was released in the market in November, IHS iSuppli Research estimated that Amazon shipped 3.9 million of the tablets in the fourth quarter alone, while other analysts said they believed 1 million units have been sold on average each week. To gain this kind of competitive edge, Amazon resorted to a cutthroat pricing strategy, analysts said.

Whereas the least expensive iPad which is Wi-Fi-enabled and comes armed with 16 gigabytes of memory, sells for $499, the Kindle Fire retails for a mere $199. The 7-inch tablet lacks an built-in camera, unlike the iPad, but it is gaining popularity because of Amazon’s rich content.

Locked in a fierce battle with the Kindle Fire, Barnes & Noble announced on Tuesday that it is launching a $199 Nook tablet with 8 gigabytes of memory. The original version was 16 gigabytes and cost an extra $50.

“For any customer who likes to read digitally, watch movies or TV shows, browse the Web, or help their kids read and learn through interactive books and apps, our new $199 NOOK Tablet with 8GB is the best product value on the market,” said CEO William Lynch.

Samsung Electronics, which became No. 1 smartphone maker last year at Apple’s expense, is also challenging its chief rival in the tablet market.

According to industry sources, Samsung plans to unveil its Galaxy Tab 11.6 at the Mobile World Congress (MWC), the world’s largest trade fair in the mobile industry, which runs in Barcelona, Spain, from Monday to Thursday next week. The device is believed to have an 11.6-inch tablet with a 2,560x1,600-pixel resolution.

Samsung’s move is seen as preemptive strike against Apple, which is rumored to be launching its iPad 3 on March 7, although Apple has yet to officially set the date.

“The tablet PC market is just as big as the smartphone market,” said an official at Samsung Electronics. “We will center on expanding our presence there.”