DUP leader strikes back on Lee’s recent spate of vitriol

DUP leader strikes back on Lee’s recent spate of vitriol 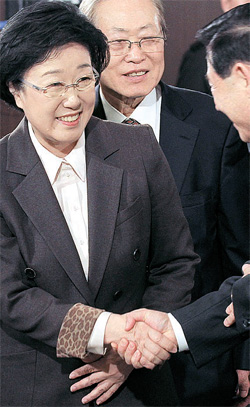 Democratic United Party Chairwoman Han Myeong-sook attacked President Lee Myung-bak yesterday for having given up his political neutrality, calling his recent criticism toward the liberal leaders an attempt to intervene in the upcoming legislative elections.

With Han’s counterattack, tensions between the largest opposition party and the Lee administration escalated further over some sensitive issues, including the Korea-U.S. free trade agreement ahead of the April 11 general elections.

During his live press conference on Wednesday, Lee doled out unusually sharp criticism toward the opposition leaders, including Han, for their inconsistencies on key policies. Lee called them out by name and used their past remarks to attack them.

Han launched a counterattack yesterday during a live TV debate hosted by the Korea Broadcasting Journalists Club. Han first stressed that the largest opposition party does not approve the Korea-U.S. free trade agreement, which will take effect on March 15, because the Lee government’s renegotiation has damaged the balance of the accord. She then attacked Lee for failing to keep his political neutrality in a sensitive time before the elections.

“There has never been a time when the president of our country called the opposition party leader and former administration officials by name and bombarded them with criticism during a press conference,” Han said. “I think he went too far if it were an election strategy.”

“And calling us by name is a political intervention in the elections,” she said. “It is unacceptable. He must explain this.”

Han also said Lee himself had “flip-flopped” many times on his key pledges, such as the new airport construction project and Sejong City. “And yet, he focused on inconsistencies of others and made an election strategy to launch a character attack,” Han said. “That is wrong. I think he doesn’t have class.”

During the debate, Han said the DUP wants to win the majority in the National Assembly, but the prospect is difficult. Because the Saenuri Party has strong influences in Busan and South Gyeongsang, Han said the liberals will fight hard in the region, adding that “I think there is a high possibility for a victory of Moon Jae-in, head of the Roh Moo-hyun foundation.” Moon has registered his candidacy in Sasang District in Busan.

“She aided and abetted the Lee administration’s total failure,” Han said. “She should be held jointly accountable for sitting in the passenger seat next to the driver.”

Asked about the prospect of an alliance with other liberal groups including the Unified Progressive Party, Han said the liberals all share the same sense of crisis that they must unite to win.

“This is not an easy election,” she said. “So we will try to come up with a good outcome by joining efforts together.”

Han also dismissed speculations that technocrats-turned-lawmakers inside the DUP who were considered moderates would not be given a nomination, stressing that the nomination process will be fair and transparent. She also stressed that the party will keep its promise to provide 15 percent of their nominations to female candidates as part of the reform.

Han also said the DUP wants to improve inter-Korean relations when it wins a majority in the National Assembly, adding that it had failed to do so with its current 88 seats in the 299-member legislature.