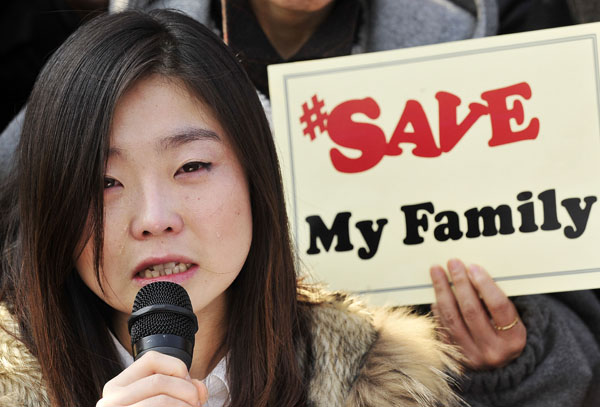 In front of the Chinese Embassy in Seoul yesterday, a college student who defected from North Korea and settled in the South appeals to the Chinese government not to repatriate North Korean refugees. [NEWSIS]


In response to rising public demand for the release of 24 North Korean defectors detained in China, the government and ruling Saenuri Party are considering issuing so-called “South Korean identity certificates” to them.

In fact, there’s no such certificate to prove citizenship of South Koreans except the official identity card. However, the ruling party and the Blue House determined to issue the special certificate only for the detained defectors to give them the status of South Korean citizens and stop the Chinese government from returning them to the North.

Saenuri Party floor leader Hwang Woo-yea, Minister of Foreign Affairs and Trade Kim Sung-hwan and other government officials held a meeting to take steps against China’s imminent repatriation of the defectors yesterday and announced their plan to reporters.

“Lawmakers promoted the plan to issue such a certificate, and the government responded that it would review the idea,” Lee Ju-young, chief policy maker of the Saenuri Party, told reporters at a briefing yesterday.

SP floor leader Hwang also said, “The legal problem of North Korean defectors is not just a matter of several countries, but a matter of the world and humanity. The Chinese government should follow international rule and procedures transparently.”

An official of the Saenuri Party said on the condition of anonymity, “Rather than discussing whether the certificate would indeed work to rescue the defectors, we expect holding a meeting between the ruling party and the government would put some pressure on the Chinese government.”

The party and the government also said that they will pass a resolution to prevent further repatriation of North Korean defectors at the National Assembly’s Foreign Affairs, Trade and Unification Committee. The resolution was raised by Park Sun-young, a lawmaker of the Liberty Forward Party who has staged a hunger protest in front of the Chinese Embassy in Seoul since Tuesday and collected signatures of 29 ruling and opposition party lawmakers to urge the legislature to pass the resolution.

They will also request help to save the defectors from the Red Cross Society of China.

In a regular report submitted to the UN Human Rights Council, Darusman said that he heard from witnesses that many North Korean defectors sent back to their homeland suffered from forced labor, guilt by association and imprisonment in concentration camps. He also urged neighboring countries of North Korea to respect the principle of nonrefoulement, an idea in international refugee law that considers the hazardous status of refugees defecting from a state that could threaten their lives.