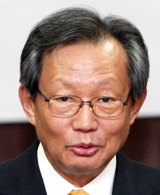 Choi, a career diplomat with four decades of foreign service experience, will replace Han Duck-soo as ambassador to Washington. Han stepped down last week and took office as head of the Korea International Trade Association earlier this week.

“It depends on the U.S., but I think the procedures can be completed in three to four weeks,” he said.

Choi is well versed in both bilateral and multilateral diplomacy, and is considered the right person to handle various issues with the United States and move the Seoul-Washington alliance forward in a stable manner, the spokesman said.

Choi, 63, entered diplomatic service in 1972, and has since served in various key posts, including ambassador to the U.N. and Austria, as well as vice foreign minister. He also worked as special representative of U.N. Secretary-General Ban Ki-moon for Cote d’Ivoire. Yonhap