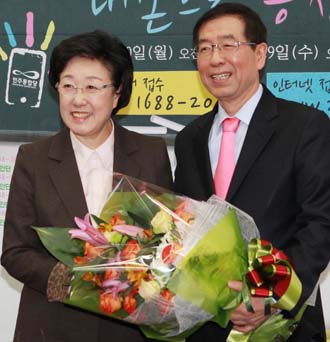 Mayor Park attended a ceremony to announce his official membership of the DUP at the National Assembly yesterday, four months after being elected as the mayor of the capital city by beating Na Kyung-won, the high profile ruling Grand National Party (now Saenuri Party) rival, in a by-election held in October 26. “The nation wants to make a regime change and judge the corrupt government,” Park said through a press release distributed prior to the accession ceremony. “The party and I should work hard to change the old politics in order to respond to the nation’s call.”

Later in the afternoon, Park held another press conference at Seoul’s City Hall and said he will personally forgive Kang Yong-seok who falsely accused his 27-year-old son of draft-dodging. Kang resigned Wednesday after his accusation turned out to be wrong. “My son and I decided to forgive Kang and people who were involved in producing ridiculous and groundless rumors,” Park said.

Park, however, said the people who took part in leaking his son’s personal information should take responsibility.