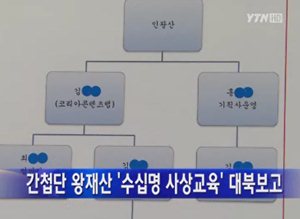 Five men involved in an underground spy ring initiated by North Korea have been sentenced to prison.

The Seoul Central District Court sentenced the leader, a man surnamed Kim, 49, to nine years in jail for violating the National Security Law, including charges that he leaked confidential political intelligence and met North Korean spies in China and Japan.

The other four were sentenced to between two and seven years in jail.

Prosecutors said that the naming of the spy ring in particular reflected the men’s pro-North leanings. The spy ring was named Wangjaesan, or Mount Wangjae, after a mountain in Onseong, North Hamgyeong, in 2005, the year it was designated by the North as an anti-Japan symbol and historic site.

The court, however, rejected the prosecution’s core charge that the five men had formed an antistate organization and systematically carried out antistate activities for two decades.

In its ruling, the court said that testimony from a key witness in the prosecution’s case, a former member of the spy ring surnamed Cho, was inadmissible.

“We didn’t take Cho’s testimony as evidence because he left the group after developing doubts about the North Korean government in the 1990s,” senior judge Yeom Gi-chang of the Central District Court said. “But we decided on strong punishments because it is obvious that the men threatened national security by leaking information that is important to the country.”

The court said that pro-North activities are illegal because North Korea has continuously threatened South Korea’s democracy, for instance with armed provocations, for decades.

Kim was arrested last August on charges of organizing and joining an antistate organization after having received a directive from former North Korean leader Kim Il-sung. The prosecution said Kim had followed orders from the North Korean leader in 1993 to promote juche, the North’s ideology of self-reliance, and from the Workers’ Party’s foreign liaison department in 2001 to recruit more spies.

Kim is known as a progressive social activist. The other four men have been identified, separately, as entrepreneurs and the secretary of a politician. Prosecutors said that each man had a particular role in the organization, with the entrepreneurs in charge of raising money and the others responsible for political intelligence.