In blend of traditions, harmony rises

In blend of traditions, harmony rises 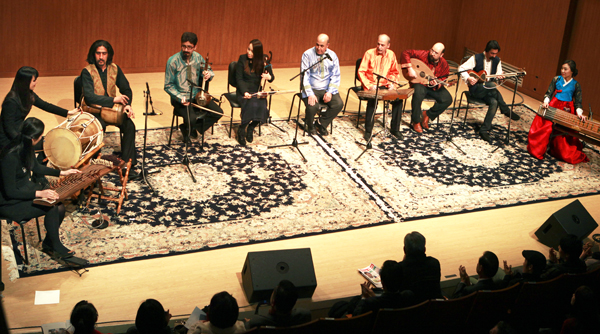 Musicians from an Iranian troupe and a Korean ensemble play their respective traditional instruments during the final number at a Feb. 13 performance. Sponsored by the Iranian Embassy and Arts Council Korea, the “Persian Night” concert celebrated 50 years of diplomatic relations between the two countries. It was held at Olympus Hall in Samsung-dong, southeast Seoul. By Park Sang-moon

The rhythmic strumming of the oud, a Middle Eastern pear-shaped guitar-like stringed instrument, and the hollow beat of the tonbak, a Persian goblet drum, echoed through a concert hall in Samseong-dong, southeast Seoul, transporting listeners to a night of Persian music.

To celebrate 50 years of diplomatic relations between Iran and South Korea, the Embassy of the Islamic Republic of Iran and the Arts Council Korea (ARKO) held a concert of traditional Iranian and Korean music on Feb. 13 at Olympus Hall.

In the first half of the concert, an Iranian music troupe called Nava-ie-del performed duets on several Persian instruments, usually a stringed instrument accompanied by a percussion instrument, most often the tonbak. The sextet was performing in Korea for the first time.

Other Persian instruments to which the audience was introduced including the tar, a long-necked lute with a double bowl-shaped body and the kamanche, a bowed stringed instrument similar in shape to the Korean haegeum or the Chinese ehru. Most unique in sound was the santour, a Persian hammered dulcimer, trapezoidal in shape and similar to a xylophone.

For the second half of the “Persian Nights” concert, vocalists joined the instrumental group. One of the songs, “Avaz dobeitie Babataher” was about religious tolerance. The lyrics translate as “If Zoroastrian, if Christian, if Muslim/ If we’re all, or we’re none, it’s just you.” Other songs were romantic or patriotic.

The traditional Korean music side of the concert was in the form of An Jung-hee, who also was the host of the evening, on the geomungo, (a six-stringed zither made of oak), accompanied by musicians on the gayageum (12-string zither), haegeum (two-stringed fiddle) and janggu (hour-glass shaped drum).

A final number was a joint performance of the Iranian and Korean troupes, mixing the traditional sounds of each culture into a new one.

An, who teaches at the Korea Arts and Culture Education Service, said, “Iranian music is like a mosaic or carpet that is multi-layered, and Iranian instruments and Korean instruments blend very well together.”

She continued, “I knew we couldn’t do something too traditional, and we had very little time to prepare.” But bringing her experience in Iran and practicing just before the Iranian musicians arrived, they decided to perform the lilting “Morning Bird,” which was able to convey the distinct sounds of the instruments of each country but still present a unified sound.

An spent two weeks in Iran last year, in a cultural exchange trip sponsored by the Arts Council Korea. “I definitely want to return again,” she said of her stay there.

An Iranian fashion show was also presented during the concert, displaying elaborate costumes in multitudes of layers of vibrant colors, dazzling embroidery and beading. The clothes, from the Cultural Foundation of Shiraz and designed by Eshrat Badr, represented thousands of years of Iranian history. Badr, who attended the concert, said, “Korean designs and Iranian designs are similar in the colorfulness of the clothes and the embroidery.”

Hossein Darvishi, the Iranian Embassy’s counselor for cultural education affairs, said, “Our two countries’ diplomatic relationship goes back to a thousand years ago when an Iranian prince married a Korean Silla Dynasty princess, and this is a great opportunity to celebrate this historical and cultural link.”

Rahul Mehta, a 22-year-old Indian-Canadian who is an exchange student at Seoul National University, was invited to the concert by an Iranian friend. Mehta said, “It’s my first time hearing Korean and Persian music performed together, though I’ve heard Persian music before, and the result is a fabulous blend and very satisfying.”