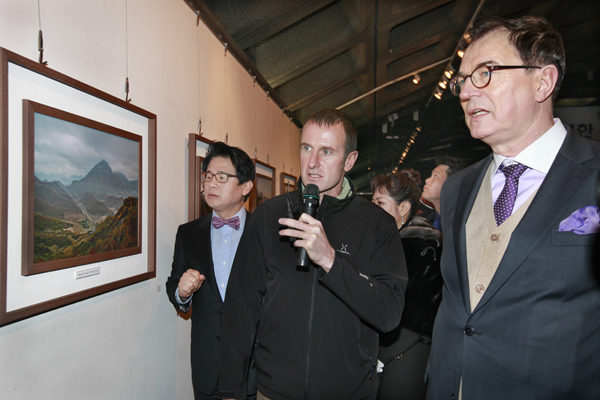 Roger Shepherd, left, a New Zealander who made his six-year-long travel into South and North Korean mountains, introduce his photos of the scenery he took during his journey to Lee Charm, CEO of Korea Tourism Organization, on Friday at the Seoul Metro Gallery. By Park Sang-moon


Roger Shepherd worked as a police officer in New Zealand until he became captivated by the beauty of Korea during his first trip here in 2006. Since then, he has traveled the length of the Baekdudaegan range, documenting his trip through a series of breathtaking photographs.

A selection of his photos is on display at the Seoul Metro Gallery in Gyeongbokgung Station in a free exhibition that continues until tomorrow.

The mountain range is regarded as the backbone of the peninsula and runs from Mount Baekdu in the north to Mount Jiri in the south.

Shepherd first attracted attention in 2010 with a 452-page guide called “Baekdudaegan Trail: Hiking Korea’s Mountain Spine.” Written with Andrew Douch, it was the first English-language guide to the trail. 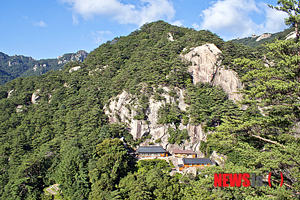 Together, the two men were the first foreigners to traverse the length of the 735-kilometer (457-mile) trail, a journey that took 70 days.

Shepherd later left his home country to start a business here, Hike Korea, which promotes the country through photography and writing.

“I do particularly enjoy the Korean countryside and the friendly, unstressed, undemanding people there,” Shepherd told the Korea JoongAng Daily. “The mountain culture here is unique to Korea and should be branded more often as a form of Korean identity for tourism and travel, as so much of Korean culture and history is wrapped up in the backdrop of its mountains.”

After the exhibition closes in Seoul, it will travel to New Zealand in March and April, where it can be seen at the Pakata Museum of Arts and Cultures.

Lee Charm, CEO of the Korea Tourism Organization, was present at the exhibition opening and said in his remarks, “For me, South Korea’s mountains always make me visit them again and again. Then his photos also made me go to North Korea.”

Also present was Lee Don-goo, the minister of the Korea Forest Service, which sponsored the exhibition.

“It’s really moving that a foreigner has delivered photos showing the beauty of the four seasons in the Baekdudaegan by traveling it on foot,” Lee said, adding he would try to have the Baekdudaegan registered as a Unesco world heritage site.

At the event, Shepherd talked more about visiting North Korea.

“The North Korean people were very kind and accommodating to me and worked very hard to give me access to their mountains so I could show the world the cultural and natural importance of the Baekdudaegan,” he said. “I still have to go back and take more photos in the North, and I hope to do that this year if I can find a sponsor. If I do, then I’ll spend six weeks in the Baekdu-gowon [plateau] and the Gaema-gowon in Ryanggangdo.”

He said his goal is to publish more books on Korea’s mountains, so that people can see the country for its mountains and not its modernism.

“The final images will become part of a high-quality photo essay book that I will publish on the culture and history of the Baekdudaegan,” he said. “The two Koreas will feature together in one book, bonded by the harmony of the mountains.”