Incomes keep rising, and so does the wealth gap

Incomes keep rising, and so does the wealth gap 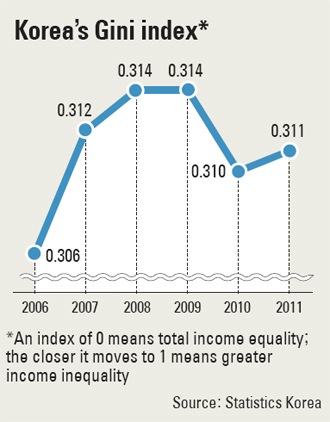 Parks admits he earns a “decent” salary of 3.5 million won ($3,108) per month. But due to rising prices, his monthly spending has climbed 450,000 won to 3.2 million won, and he’s cut in half the amount he saves every month. And he couldn’t afford his insurance payments.

“I took out a loan of 40 million won last year because I expected no problems in meeting the interest payments in addition to saving for the future,” he said. “But I did not anticipate how rapidly living costs would rise.”

Last year, Park’s spending on daycare for his kids and food jumped 20 percent from the year before. Korea’s per capita gross national income exceeded $20,000 per year in 2007 and then again in 2010.

But for many Koreans like Park, the growth of national incomes on average is a statistical mask for what they are feeling: less flush every year.

Nominal income, which refers to income unadjusted for the effects of inflation or deflation, has exceeded a yearly growth rate of 4 percent for the last five years except in 2009.

More realistically, the growth of Korean households’ real income - or income adjusted for inflation - has remained in positive territory over the same period except 2009, rising 1.7 percent last year.

In the data, Koreans appear to be curbing their spending a bit while having more income coming in. Households’ disposable monthly income - Remaining income after tax came to an average of 3.12 million won, up 5.5 percent from a year earlier. Average monthly spending rose by 5.2 percent to reach 3.11 million won, slowing down from a growth of 6.2 percent in 2010.

However, such numbers mask a deepening divide between Korea’s wealthy and the poor.

Statistics Korea said that Korea’s “Gini index,” which measures income inequalities, rose from 0.31 in 2010 to 0.311 in 2011. A Gini index of 0 means everyone has an equal income, while 1 would mean one person holds all the wealth of the entire country; so the closer it moves toward 1, fewer individuals enjoy a bigger piece of the income pie. And Korea’s is moving closer to 1, albeit slowly.

Yet another index of income distribution shows the same trend. The income ratio between the lowest and highest quintile, which divides income of the top 20 percent by income received by the lowest 20 percent, rose from 5.66 in 2010 to 5.73 last year.

“Korea’s middle class has been shrinking since the 1997 Asian financial crisis, and the income growth of the median household falls short of the productivity growth rate for the economy,” said Park Jun, a research fellow at the Samsung Economic Research Institute.

“The middle class must be rebuilt,” he said. “Because they are key spenders, the finances of middle class households contribute to domestic economic growth.”