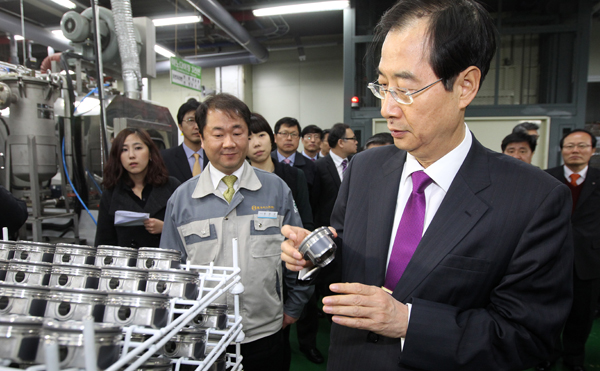 The new chief of Korea’s largest trade promotion organization pledged to provide support to small exporters in the country, even helping them get workers with foreign language expertise.

Just two days after taking office as the 28th chairman of the Korea International Trade Association, Han Duk-soo made a trip to Ansan, Gyeonggi, yesterday to listen to problems small manufacturers are having doing trade with advanced countries like the United States.

It was the first official appointment as KITA chief for Han, who until recently was Korean ambassador to the U.S.

One of the companies that he visited was Dong Yang Piston, a mid-sized auto part maker with annual revenues of 162.5 billion won ($144 million). The company’s main clients are Ford and Chrysler.

“When the Korus FTA goes into effect next month, tariffs on Korean-made auto part exports will be immediately lifted,” Han said.

Han encouraged the small companies to make full use of the FTA to penetrate the world’s largest market.

The nine executives said they are confident they can compete with auto parts makers anywhere else in the world.

“We want the government to take more aggressive action in signing free trade pacts with more countries,” one executive said.

However, they called for support from the government and KITA to address some chronic difficulties.

The most common problem was finding employees with expertise in trade and foreign languages.

The executives complained that young workers fluent in English are reluctant to work at small companies.

“KITA will seek measures to address the language issue with the central government, local governments and universities,” Han said.

He suggested solving the problem by establishing a kind of call center where small exporters can get foreign language support when communicating with foreign business partners.

The Korus FTA is the largest trade deal for the U.S. since it signed the North American Free Trade Agreement with Canada and Mexico in 1994, according to the KITA chief.

Considering that the U.S. intends to clinch trade pacts with “strategically important” countries like Israel, the Korus FTA carries great significance, he said.

The U.S. market is especially crucial for the Korean auto industry, since about $6 billion worth of finished vehicles and $4 billion in auto parts are sold in that market.

Han, who had traveled to 57 cities in the U.S. to promote free trade, described how American states are trying to attract Korean investment.

“Many state governors in the U.S. told me they would like to offer land and a workforce if Korean companies want to set up branches there,” Han said.

He added the FTA will make it much easier for small Korean companies to enter the U.S. market.

Two things have changed how Korea is viewed in the U.S., Han said.

“Korean-made cars are running on American roads and Korean electronics appliances are in American homes,” he said.