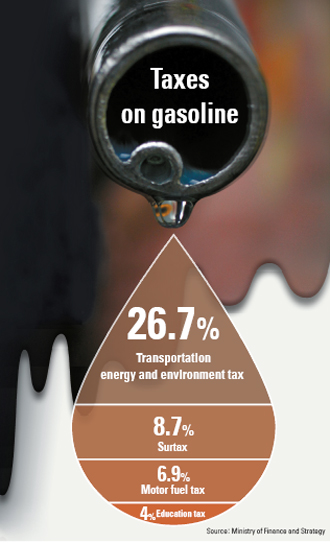 Pump prices at gas stations continue to break records as the international price of oil continues to spike.

The rising gas prices are causing calls to be renewed for the government to bring down taxes on oil products, especially with an April general election edging closer.

Prices at gas stations have risen since early this month as tension over Iran drove international prices up.

“While the negotiations between the International Atomic Energy Agency and the Iranian government broke apart and the U.S. currency continues to strengthen, international prices for crude oil continue to rise,” said an official at the state-run oil agency.

As of Thursday, Dubai crude was traded at $120.22 per barrel, up 80 cents from the previous trade.

Dubai crude accounts for over 80 percent of Korea’s oil imports.

Prices of West Texas Intermediate and Brent crude have also been rising.

Political parties and civic groups are asking the government to lower oil taxes as it did in 2008.

In 2008, the government lowered taxes on gasoline by 10 percent for a year when international crude prices soared to record levels.

“The government needs to lower the oil tax by 10 percent because of the burden on the public and small and medium companies,” said Park Joo-sun of the Democratic United Party earlier in the week.

Knowledge Minister Hong Suk-woo told reporters Thursday that a decrease in taxes on gas was not being considered at the moment.

But he noted that the government is closely monitoring the situation and will look into other possibilities when gas prices reached a certain level. Hong did not say what that level was.

The government has been insisting that taxes on oil are not high compared to other member countries of the Organization for Economic Cooperation and Development. In the U.K., Ireland and the Netherlands, taxes account for nearly 60 percent of the retail price of gasoline.

Korea’s taxes account for 46 percent of the total price.

When consumer prices were rising early last year, the government pressured local refineries to cut their prices and investigated price-fixing in the industry.

After an intense standoff, major refineries including GS Caltex, SK Innovation and S-Oil offered a 100 won per liter discount for three months starting last April. Yet, they still had an excellent year.