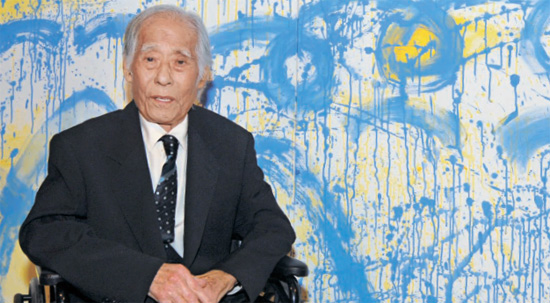 NEW YORK - The paint color and brush stroke may have changed over the course of Po Kim’s 70-year career, but his passion for the arts is unwavering.

The 95-year-old artist, known in Korea as Kim Po-hyun, will hold a solo exhibition at the Korean Cultural Service New York in Manhattan displaying his abstract painting style.

The solo show coincides with the 70-year anniversary of Kim’s career and displays the passion that has made him one of the most celebrated artists in Korea.

There were three moments Kim considered to mark the start of a “new life,” and for this reason the exhibition is divided into three parts: birth, survival after torture and life after the death of a loved one.

After his wife’s passing last April, Kim focused on his art work more than ever to cope with his sorrow.

He soon tripped and fell over, putting him in critical condition for four months while he rested and hoped to recover.

“There were times when I felt this was it, my life is over,” Kim said.

Despite the obstacles he faced, Kim did not stop painting. His love for the arts helped him get through the hard times, he said.

“Even when Kim was hospitalized, he was always thinking about his art work,” curator Choi Hui-seong said. “Whenever I visited him at the hospital, he always pestered me to set the patient gown aside for his installation art work.”

Right after Kim was discharged from the hospital, the first thing he did was paint and finish the third part of the exhibit, life after his wife’s death.

In this segment, Kim’s art is in mostly white and black.

The second section of the exhibition brings audiences to Kim’s survival after torture during the Yeosu-Suncheon Rebellion in 1948 through colorful paintings.

After Kim immigrated to the United States in 1955, he did not have a single penny and worked hard in factories.

It was during these rough days when he met his wife and she influenced Kim’s art. Splendid splashes of colors and bold strokes appear in his works.

A noticeable Korean influence of strong strokes takes up a huge portion of Kim’s art in he 1960s.

“In Kim’s early works, there are vigorous strokes that can be seen mostly in Korean paintings,” said Robert Morgan of the Prett Institute.

“Kim’s stroke is special since it has both a strong as well as free feeling.”

Those who miss his exhibition can see his collection through three books that contain Kim’s 70-year portfolio.