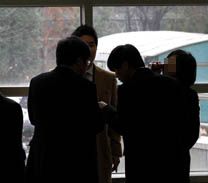 The harsh reality of the country’s unemployment issue has even affected the legal community. Unemployed lawyers are taking less prestigious positions just to land a job.

When the Anti-Corruption and Civil Rights Commission of Korea announced on Thursday it had hired three lawyers who just graduated from the Judicial Research and Training Institute as level-six, junior officials, numerous lawyers were in an uproar, criticizing the move as degrading to Korean lawyers.

According to the commission, the three lawyers were accepted among seven applicants and they will be handling jobs including lawsuits concerning the commission, interpreting legislation and giving legal advice.

Such a case, in which a lawyer who passed the bar exam and became a professional lawyer as a level-six official, is unprecedented here. They normally begin as level five or better.

In Korea, civil servants are divided into nine levels - level one is the highest. In the past, applicants with attorney licenses were hired as senior-level officials above the pay grade of level four, but recently they were recruited as mid-level officers at level five.

Moreover, in companies, they were once hired as department heads or deputy heads, but recently they were designated as ordinary employees or just one level above.

If those with attorney licenses after graduating from the judicial training institute get appointed as judges or prosecutors, they will be in between level three and level four.

Therefore, lawyers who have passed the bar exam and received jobs at a level-six position, which is lower than those who passed the Public Administration Exam (a test that requires less schooling and knowledge) and work in level-five positions, has shocked the legal community.

According to analysts, the phenomenon is the direct result of the harsh unemployment problems lawyers are facing. Over the past decade, about 1,000 law students achieved attorney licenses annually, totaling more than 10,000, while the demand for lawyers in Korea has been stationary.

According to the Korean Bar Association, there are about 15,000 lawyers in Korea, up from 4,699 in 2000. Moreover, as the newly established law schools in Korea graduate 1,500 students annually, on top of the expected 1,000 other graduates, the total number of newly licensed lawyers this year will reach 2,500. However, according to legal experts, the demand for lawyers today won’t accommodate even half of the graduating crop.

Upon witnessing their seniors landing jobs with downgraded statuses, students at the Judicial Research and Training Institute posted an announcement on its Web site and said, “Let’s never apply for a position as a level-six civil servant or below.”

About 20 colleagues and juniors of the three hired lawyers at the civil rights commission along with Cho Soon-yeol, vice president of the Korea Bar Association, visited the office and complained that “it is a public humiliation to make lawyers who graduated from the Judicial Research and Training Institute work under an official who passed the Public Administration Examination.”

However, the commission explained the move was to offer them more benefits that the lawyers wanted.

“We have been hiring lawyers as level-five contract employees but former lawyers at the commission left the job saying they can’t get promoted or receive benefits under such contracts,” explained an official from the commission. “Therefore, we have decided to hire them as level-six regular employees with benefits and possibility of promotion.”