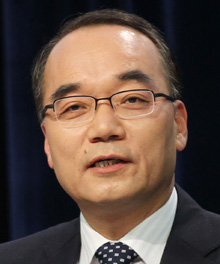 Korean inflation may accelerate above the government’s target on higher oil prices, just as economic growth is about to start improving, Finance Minister Bahk Jae-wan said.

While inflation is “likely” to dip this month below the 3.4 percent rate in January and be “even lower” in March, instability in the oil market threatens to push overall consumer prices above the government’s 3.2 percent target for the year, Bahk said in an interview in Mexico City yesterday. He said that a 10 percent increase in the cost of crude pushes inflation up by 0.12 percentage point.

“Oil prices are likely to have a far-reaching impact on the overall economy,” said Bahk, who is attending meetings of Group of 20 finance ministers. “We are hopeful that the 3.2 percent will be reached or even lower. It is a priority for the government to control inflation as much as possible.” The slower inflation rate in January was largely because of a high year-earlier level, the central bank said in a report to the National Assembly last week. Price pressures will persist because of higher inflation expectations and unstable oil costs, it said. The expected inflation rate over the next year was 4.1 percent in January, according to a Bank of Korea survey last month.

“It’s not only the oil price hike but also quantitative easing in the major countries, like the U.S. and the European countries and Japan,” he said. “Because of that, there is an abundance of liquidity going around the world, so there is also an inflationary pressure from the outside.”

Economic growth is likely to gather momentum in the second quarter, Bahk said, citing a possible resolution to the sovereign debt crisis in Europe, the establishment of a free- trade agreement with the U.S. and the government’s decision to “front-load fiscal spending” so that 60 percent of expenditure takes place in the first half of this year.

“I am hopeful that the Korean economy will bottom out in the first quarter and go on the path of recovery in the second quarter,” Bahk said.

Both the BOK and the government forecast 3.7 percent growth this year. The nation’s gross domestic product expanded 0.4 percent in the fourth quarter of 2011 from the previous three months, the slowest in two years, according to a BOK report on Jan. 26.

The central bank kept the benchmark seven-day repurchase rate unchanged at 3.25 percent for an eighth month on Feb. 9 as the economy slowed and exports declined due to European fiscal turmoil.

Separately, Bahk said talks with central banks of developed nations to mitigate instability in Korean bond markets would be completed in the first half of this year, and that he would seek similar discussions with the central banks of emerging nations. He would not disclose what measures might be imposed.

The government is also reviewing 2008 macroprudential policies and studying capital inflows to bond and equity markets.

“Based on this, we would also think of some options on improving the safeguards without adding burden to investors,” he said. “We have no plans to immediately implement them.” Bloomberg