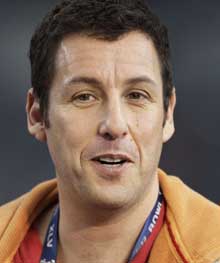 SANTA MONICA, California - When Adam Sandler’s bad, he’s really bad, according to voters for the Razzies, an Academy Awards spoof that singles out the worst movies of the year.

Sandler received a record 11 nominations Saturday for the Razzies as star, producer or writer on three 2011 movies - “Jack and Jill,’’ “Just Go with It’’ and “Bucky Larson: Born to Be a Star.’’

That more than doubled the previous record of five Razzie nominations held by Eddie Murphy for 2007’s “Norbit.’’

Sandler’s nominations include worst actor for both “Jack and Jill’’ and “Just Go with It’’ - and worst actress for “Jack and Jill,’’ in which he plays a family man and his own twin sister.

Sandler also had two nominations as worst screen couple opposite Jennifer Aniston or Brooklyn Decker in “Just Go with It’’ and opposite Katie Holmes, Al Pacino or himself in “Jack and Jill.’’

As a producer, Sandler was credited with worst picture and worst prequel, remake, rip-off or sequel nominations for both “Bucky Larson’’ and “Jack and Jill.’’

“It’s almost karmic for someone to have made that much razz-able stuff in one year,’’ said Razzies founder John Wilson. “He has angered someone really powerful, I would say.’’

Along with “Bucky Larson’’ and “Jack and Jill,’’ worst picture contenders are “New Year’s Eve,’’ “Transformers: Dark of the Moon’’ and “The Twilight Saga: Breaking Dawn - Part 1.’’

“Jack and Jill’’ led with 12 nominations, with “Transformers’’ second with nine and “Breaking Dawn’’ right behind with eight.

Razzie nominations were released on the eve of the Oscars. Winners will be announced on April Fool’s Day.