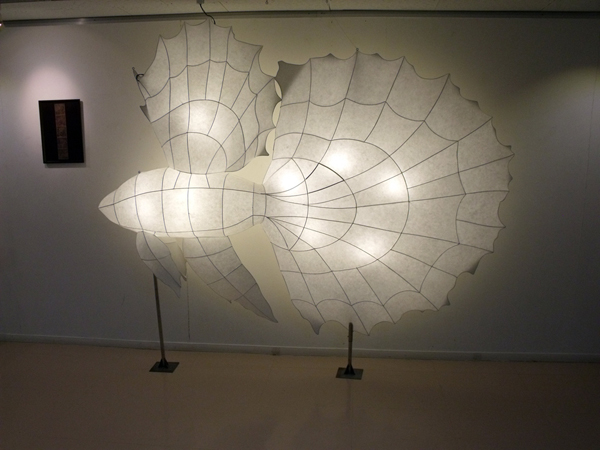 Kim Jae-sung’s installation “Fish” is part of the “Flow” exhibition, which features Korean artists that have been strongly influenced by hanok, or traditional Korean houses. The exhibition runs until March 2 at the Hongik Museum of Art in western Seoul. Provided by the museum

A new exhibition at the Hongik Museum of Art in northwestern Seoul shows a range of modern artwork designed especially for hanok while showcasing the traditional Korean houses that are the source of the artists’ inspiration. Through installations, photographs, furniture and interactive media, the “Flow” exhibition captures an enticing blend of traditional and modern elements. 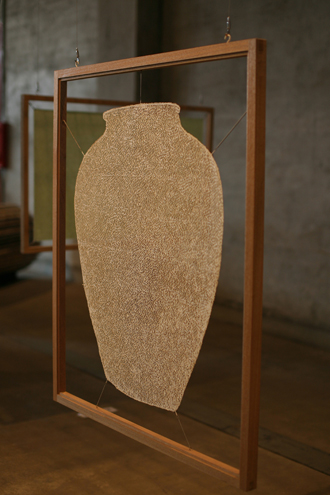 Park Gye-hun’s artwork “Hangari without a Blank Space” is made of hanji, traditional Korean mulberry paper, and has small patterns cut into the thin paper to give the work texture and dimension.

Upon entering the exhibition, visitors will see a large fish that has both a traditional meaning and a modern twist.

The fish is made of hanji, or traditional Korean mulberry paper, and has LED lights that shine through day and night.

According to curator Park Ji-yoon, the piece is typical of the works made by artist Kim Jae-sung, who uses LED lights in every work he does.

It is definitely an eye-catching piece of art, but there is another reason why it opens the exhibition.

With the LED lights brightening the fish from the inside, a stream of good wishes warms the atmosphere.

Park said that she had originally planned to have three sections representing the main parts of a hanok - the daemun (front door), sarangchae (men’s area and study room) and anchae (women’s area) - but the plan had to be revised due to regulations by sponsors. Still, the finished space retains the character of each of these three main parts.

Beyond the fish-shaped lantern, visitors step through the front door to see pictures of pansori (narrative singing) masters.

Park said she had a good reason for choosing to place the pictures there. The central courtyard is the heart of a hanok - where heaven, earth and humankind all meet - and it had the same status as the other rooms in the house.

Like the courtyard, pansori is a medium for the melding of pan (place) and sori (sound).

All of the photos of the pansori singers have gold text inscribed over the images of their passionate facial expressions and dynamic movements.

“Artist Roh Seung-whan wrote the lyrics of the songs the pansori masters were singing at the time he took the picture,” Park said.

The main feature in the sarangchae section is a large table with a touch-screen tabletop and an interactive video by artist Yoo Hyun-jung that serves as both artwork and an educational device.

“Since the sarangchae was a men’s room as well as a place where children studied, I wanted to have artwork that had a lesson for both children and adults,” Park said.

Instructions beside the table tell viewers to place a book or ceramic bottle onto the screen and wait to see what happens. When the book is matched to the appropriate place on the screen, a stream of hangul (Korean alphabet) letters spreads across the screen. When the bottle is set on top of the screen, we see a trail of stars.

Park, who studied occidental painting and environmental design, is the recipient of the museum’s first HOMA Curator Project, which aims to help young curators start their careers. This is her first exhibit as a curator.

“Throughout the years, I’ve helped other people hold exhibitions, but this is my first exhibition, and I’m honored to have this opportunity,” she said.

She said that in selecting artists for this exhibit, she tried to choose artists whose humanity shone through their artwork.