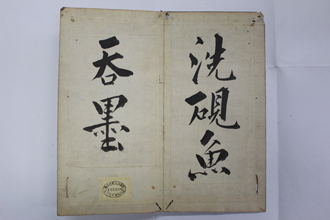 “Wandang Seocheop” by calligrapher Kim Jeong-hee is one of two books recently discovered in Japan.

Two collections of writings by the famous calligraphers Kim Jeong-hee (1786-1856) and Lee Gwang-sa (1705-1777) were discovered earlier this month by Korea’s Research Institute of Korean Studies and Japan’s Toyo Bunko, or Oriental Library.

The two institutes had been collaborating on a project to digitize classical Korean materials held overseas when the writings were discovered in the Toyo Bunko archives.

The two books, “Wandang Seocheop” and “Wongyo Seobeop,” were well preserved when they were found. The former belongs to Kim Jeong-hee, who is known alternatively as Chusa and as Wandang, and the latter belongs to Lee Gwang-sa, whose pen name is Wongyo.

Both books, which are called seocheop in Korean, will be important materials for the study of calligraphy.

Lee’s “Wongyo Seobeop” will be especially useful for the study of “Juyeok,” a Confucian text known in English as the “I Ching,” because it replicates passages from that text.

According to Baek Jin-woo, research professor at the Research Institute of Korean Studies, it is rare to find a single book in such good condition, but discovering two such books in a foreign country is especially significant.

“It is interesting to note that the books by the two famous calligraphers, who were regarded as rivals, were preserved together,” he said.

Yet even though Kim and Lee are still known as rivals today, the two men never actually met, as Kim was born after Lee passed away, Baek said.

Baek added, however, that even though Kim was for a long time harshly critical of Lee’s work, he eventually changed his mind about the old master.

In one famous anecdote recounted by Baek, Kim once removed a signboard painted by Lee that was hung on the gate of Choneun Temple on Mount Jiri in South Gyeongsang and put up a new signboard with his own calligraphy. But when Kim visited the temple again eight years later, he had changed his mind about Lee’s work and changed the signboard back to Lee’s original creation.

According to Baek, Kim’s initial criticism of Lee may have been based on his dislike of Lee’s writing style.

Kim studied abroad in China and subsequently filled various government posts. During this time, he completed his work “Wandangche,” which is also called “Chusache” after one of his pen names. His brush strokes are dynamic and free of formality. It is said that many people of the time followed his unique writing style.

“Lee’s life was much more difficult than Kim’s,” Baek said. “Also, they each belonged to rival political factions that were engaged in fierce quarrels at that time.”

When Lee’s faction fell, he was unable to enter government service. Later, he was exiled for more than 20 years after his family members were branded as rebels in 1755.

It was during that difficult and lonely time that Lee completed the work “Wongyoche.” His brush strokes are not only powerful but also smooth and fluid. It has been said that he put his soul into this work.

Other materials accompanied the discovery of the two books, including “Junghwaseonjon,” a selection of poems by Chinese poet Wangsajung selected by Kim Jeong-hee and transcribed by Sim Ui-pyeong, and materials stamped with an ownership seal, or jangseoin.

The digitization project, which is sponsored by The Academy of Korean Studies, began in January and continues through this month.

The Research Institute of Korean Studies, established in 1957, is one of the oldest and largest global Korean studies centers, producing and disseminating Korean studies resources for experts and the general public.

Toyo Bunko, established in 1924, is one of the five largest Asian studies centers in the world. It has approximately 2,000 classical Korean materials, most of which were donated by Japanese people who collected the materials during the Japanese colonial era and some of which were collected by Toyo Bunko itself.