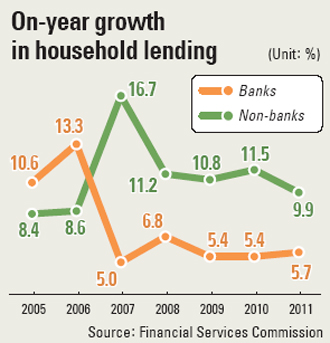 As part of efforts to slow down the growth of Korea’s snowballing household debt, the country’s top financial regulator said yesterday it will tighten rules on family loans offered by nonbank financial firms, including cooperatives and insurers.

The measures, however, fell short of putting a brake on the level of household debt as people turned instead to nonbank financial firms as the total volume hit a record high of 858.1 trillion won ($7.61 trillion) in the fourth quarter, based on recent Bank of Korea data.

According to the Financial Services Commission yesterday, nonbank financial companies, including credit unions like the National Agricultural Cooperative Federation (Nonghyup), will be required to keep their loan-to-deposit ratio below 80 percent in the next two years, while also scaling back their loans to nonmembers. 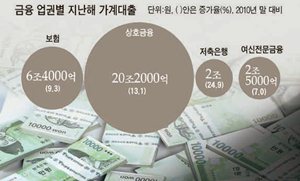 The regulator also said it will enhance its monitoring of high-risk loans and boost provision requirements, if necessary, for insurers’ household loans in a bid to reduce excessive lending. The regulator will also not allow insurance firms to use mobile text messages or fliers to promote lending or lure new borrowers when selling their insurance products.

Furthermore, the regulator said it will conduct asset quality examinations on insurance firms with fast-growing household debts. Nonmembers of cooperative groups such as the National Federation of Fisheries Cooperatives will be limited from receiving household loans.

“The high growth of household debt by nonbank financial firms could place an excessive burden on our economy as well as on the overall financial market,” said Jeong Eun-bo, director general at the commission’s financial policy bureau. “Keeping household debt in line with the growth of the real economy is very important.”

The new regulations announced yesterday will take effect gradually from the first quarter of this year. Based on these, 14 percent, or around 350 of Korea’s 2,500 cooperatives with loans that account for over 80 percent of their deposits, will be required to lower their loan-to-deposit ratios. The average ratio of loans to overall deposits at nonbank financial firms now stands at 70 percent.

It is expected that the new move will lower the total level of household debt from the non-financial bank sector by 310.9 billion won over the next two years.

“Even though the percentage of cooperatives with high loan-to-deposit ratios [more than 80 percent] is quite low, it is important that we create a ‘soft landing’ for household debt,” Jeong said, responding to criticism that the regulation lacks bite.

‘Not allowing us to give household loans to nonmembers will hurt those who are in dire straits.’ - Nonghyup official

The export-dependent economy has already begun to slow after feeling the effect of the euro zone fiscal crisis and America’s financial woes.

However, rather than tightening their purse strings, families turned instead to nonbank firms with softer rules for loans to pay for their housing debts and other daily expenditures.

Further adding to their burden, consumer prices have been soaring since early last year in Korea, a trend that has taken its toll on low- and middle-income households.

The regulator said the growth rate of household lending at local banks slowed after the measures were announced in June, while nonbanks saw new loans surge.

According to FSC data, nonbank financial firms saw growth in this area jump 9.9 percent last year, compared to a 5.7 percent expansion at banks.

Meanwhile, complaints are mounting among credit unions and cooperatives that the government’s strict regulations will harm their businesses.

“One of our major services is offering household loans, and excessive regulations are not right,” said an official from the National Credit Union Federation of Korea.

An official from Nonghyup also said that “not allowing us to give household loans to nonmembers will hurt those who are in dire straits.”

The regulator recently banned four private lenders, including industry leaders Rush N Cash and Sanwa, from operating for six months as they were found to have charged illegally high interest rates.

In response to mounting concerns among low-income earners and those with poor credit ratings that they may now have nowhere to turn, the FSC plans on expanding the volume of loans given through the government’s three lending programs, including Smile Microcredit, Sunshine and Heemang Holssi.

From this year, the Korea Asset Management Corporation will offer 400 billion won worth of loans to low-income earners at the discounted interest rate of 11 percent, down from 20 percent.

“We will try to absorb the demand for household loans from nonbank financial firms by such policy financing,” said Jeong from the FSC.