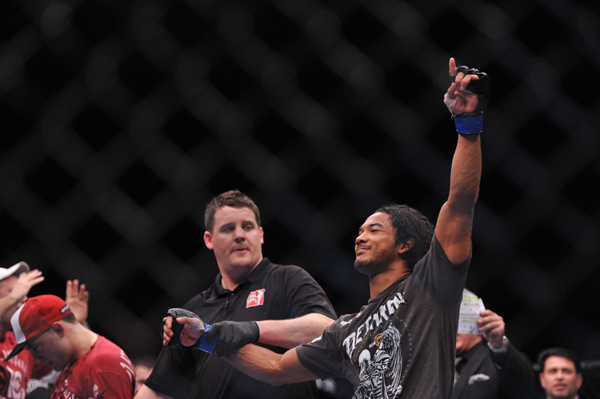 
SAITAMA, Japan - Ben Henderson, known in Korea as the “Kimchi Fighter,” claimed the UFC lightweight title with a unanimous decision over Frankie Edgar at UFC 144 yesterday.

Ryan Bader survived a frightening fall onto his neck to win every round in a unanimous decision over Japanese favorite Rampage Jackson in the co-main event of the UFC’s first show in Japan since 2000.

Henderson, whose mother is Korean-American, picked apart the smaller UFC champion with an effective all-around attack, highlighted by a vicious kick from a prone position in the second round that bloodied Edgar’s nose and face.

“I wanted to use my size to my advantage,’’ Henderson said. “Making weight is really [a struggle] for me .?.?. so I want to make sure my opponents feel that pain when we have 25 minutes inside this octagon.’’

UFC 144 was held on Sunday morning for the North American pay-per-view audience, but Saitama Super Arena was still sold out.

Along with the popular Jackson’s loss, two major Japanese stars were beaten in front of their fans: Jake Shields earned a unanimous decision over Yoshihiro Akiyama, who is also known by his Korean name Choo Sung-hoon, and Tim Boetsch rallied after two terrible rounds to stop Yushin Okami in the third. Heavyweight Mark Hunt stopped Cheick Kongo midway through the first round, and lightweight title contender Anthony Pettis impressively stopped Joe Lauzon in the first round.

Edgar repeatedly caught Henderson’s kicks and managed a handful of takedowns, but Henderson countered much of Edgar’s trademark work rate with his significant size advantage.

Henderson staggered Edgar with a perfectly placed up-kick late in the second round, with his right heel connecting squarely with Edgar’s head while Henderson was prone on the canvas. Edgar survived the round, but the kick left blood pouring from his nose, and the wound opened up again in the third round while Edgar’s left eye closed from an earlier shot.

Henderson pressed his advantages into the fifth round, bouncing around the canvas and inciting the crowd before landing several big shots. Edgar couldn’t find his way inside Henderson’s defense, and Henderson landed significant strikes into the final seconds.

The judges favored Henderson 49-46, 48-47 and 49-46. Edgar disagreed with the decision, saying he landed more strikes and takedowns.

``I thought I did enough to win,’’ Edgar said. ``That’s what my guys told me, but those are the breaks. Congrats to Ben.’’

Edgar hadn’t lost since taking the lightweight title away from B.J. Penn in April 2010, fighting through injuries and winning his trilogy against Gray Maynard with a fourth-round stoppage last October.

But Henderson had won three straight UFC fights since losing to Pettis in the last fight in World Extreme Cagefighting history before the promotion was absorbed by the UFC. When Pettis couldn’t get a title shot at Edgar due to injuries, Henderson slipped in front of Pettis for that shot at Edgar. AP