Ringing in future at MWC

Ringing in future at MWC 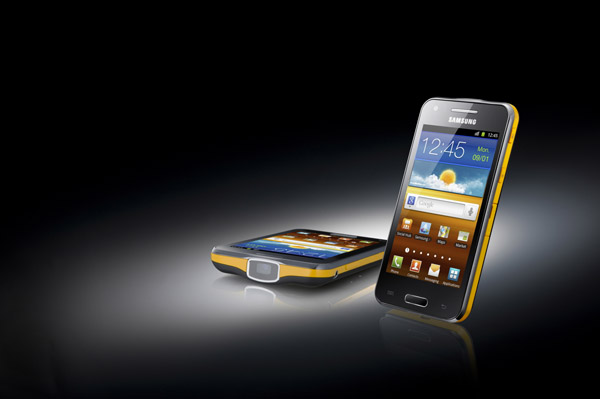 Samsung Electronics’ Galaxy Beam, a smartphone with a built-in projector, will be unveiled at Mobile World Congress in Spain, which starts today. Provided by the company


This week has been highly anticipated by technophiles as over 1,400 companies in the mobile industry are set to unveil their latest cutting-edge products at Mobile World Congress (MWC), which kicks off in Barcelona, Spain, today.

Under the theme of “Redefining Mobile,” companies such as Samsung Electronics and LG Electronics from 200 countries will provide a quick preview of what mobile phones of the future will look like, and suggest innovative new ways for people to interact with their mobile devices as they shift from mere communication devices to lifestyle-transformers influencing cars, homes, appliances, governments, utilities and education. MWC, the largest trade fair in the mobile industry, wraps up on Thursday.

Samsung Electronics, which became the No. 1 smartphone maker last year at Apple’s expense, intends to challenge its chief rival in the tablet market. It will showcase its Galaxy Note 10.1, which combines the strengths of a smartphone with those of a tablet computer by enabling users to write notes on the screen or draw images with a digital “S Pen.”

It will also reveal educational content in the form of its “Learning Hub,” which provides 6,000 textbooks and videos from 30 different education service providers in a bid to try and stop Apple’s iTunes U from gobbling up the emerging market for education-based learning platforms.

“Whether mobile makers can offer users ways of navigating the wonders of smart devices is becoming increasingly important these days, rather than just demonstrating the hardware and technologies featured in the devices,” said Shin Jong-kyun, president of Samsung Electronics’ mobile communications business. “Samsung wants to become a lifestyle creator by offering experiences that make users’ daily lives fun and special.” Samsung will also put on display low-priced smartphones including its 3.8-inch Galaxy Ace 2 and 3.3-inch Galaxy Mini 2.

LG Electronics will unveil various smartphones, including its Optimus Vu, a 5-inch smartphone that comes with a digital pen and runs on the fourth-generation Long Term Evolution network. The company will also unveil its Optimus 4X HD, a 4.7-inch quad-core smartphone, and its Optimus 3D MAX, a 3D-enabled smartphone.

SK Telecom, the country’s top mobile operator, will demonstrate its “Hybrid Network,” a new technology it developed to boost data transmission speeds by allowing two networks that use different technologies and frequency bands to work as one, such as LTE and WiFi networks.

“Our demonstration showed that the Hybrid Network’s data transmission recorded 100 megabits per second, and it only took 40 seconds to download a 4 gigabyte movie,” an SK Telecom official was quoted as saying by The JoongAng Ilbo.

KT, Korea’s largest telecommunications company, will show consumers how they can benefit from intelligent wireless connections at home, in the office and on the street at MWC’s Connected House, in conjunction with AT&T and Vodafone. KT will also show near field communication-based services enable users to make credit card payments, pay subway fees or open doors through their mobile phones. It will also unveil its Kibot robot, which teaches children to read, sing and speak in different languages.