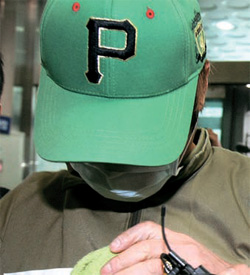 The Daegu District Prosecutors’ Office announced Saturday that it has arrested a 26-year-old broker for masterminding match-fixing schemes in the Korea Baseball Organization, the nation’s most popular sports league.

Prosecutors charged the key suspect, surnamed Kim, after he admitted to paying off two active professional baseball players - Park Hyun-jun, 26, the ace pitcher for the Seoul LG Twins; and Kim Seong-hyun, 23, another Twins pitcher - on four separate occasions during the 2011 regular season.

According to the prosecution, Kim paid the pitchers in April and May in exchange for intentionally giving up bases on balls in the first inning of games. The players were allegedly promised three million won ($2,660) per game.

The prosecution said it will summon the two baseball players as early as this week for questioning.

According to sources involved in the prosecution, Kim, the broker, is an acquaintance of another broker surnamed Kang who had already been arrested for his involvement in the match-fixing scandal that rocked the Korean Volleyball Federation.

The two were reportedly introduced to each other for the first time when Kim played baseball for a high school in Jeju.

The prosecution said it is still investigating whether or not more brokers or players were involved in the scheme. It has confirmed that financial transfers were made between Kim and Kang related to the KBO match-fixing.

An announcement regarding further investigations into active players is expected later this week.