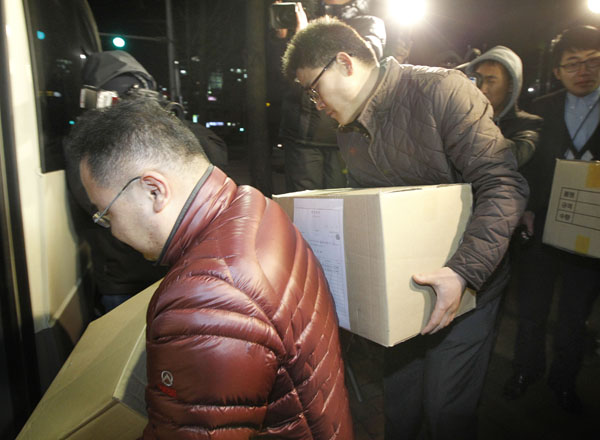 Investigators from the Supreme Prosecutors’ Office move boxes of confiscated records from Hi-Mart headquarters in southern Seoul on Saturday. The CEO and other high-ranking executives of the country’s largest home appliances retailer are suspected of embezzling company funds. [YONHAP]

Prosecutors have launched an investigation into the alleged embezzlement of Hi-Mart company funds through the CEO and high-ranking executives’ personal overseas bank accounts.

According to the Supreme Prosecutors’ Office, Hi-Mart headquarters in Daechi-dong, southern Seoul, and CEO Sun Jong-koo’s house were raided simultaneously at 3:30 p.m. on Saturday, with accounting documents and computer hard drives seized.

Sun, 65, and some high-ranking officials are suspected of having embezzled 100 billion won ($88.7 million) in personal overseas bank accounts in order to evade taxes since 2005.

The prosecution has banned Sun and involved officials from leaving the country and said that it will likely summon the CEO and his aides this week for questioning.

Hi-Mart, the nation’s leading home appliances retailer, sold some of its overseas assets to Affinity Equity Partners, a Hong Kong-based investing company in 2005.

The assets were then reacquired by Korean conglomerate Eugene Group, the largest shareholder of Hi-Mart, in 2007. Prosecutors said they suspect the executives embezzled stakes from these transactions.

The CEO is also suspected of evading some 10 billion won in taxes when he transferred his assets to his son and daughter. Prosecutors are trying to determine whether the two companies run by Sun’s children - a travel agency enterprise and an advertising company run by his son and daughter, respectively - are related to the alleged tax evasion.

“This case is about the CEO’s personal corruption, nothing related with Eugene Group,” said Choi Jae-kyung, the chief prosecutor of the central investigation unit. “No politicians or government officials are related to the case so far.”

As the prosecution continues its investigation, sales of the company’s stakes are expected to be put on hold.

Korean conglomerates such as Lotte Group, Shinsegae Group and Homeplus were thought to be potential buyers.

Hi-Mart is the largest home appliances retailer, with more than 300 stores nationwide and more than 3.4 trillion won in revenue last year.