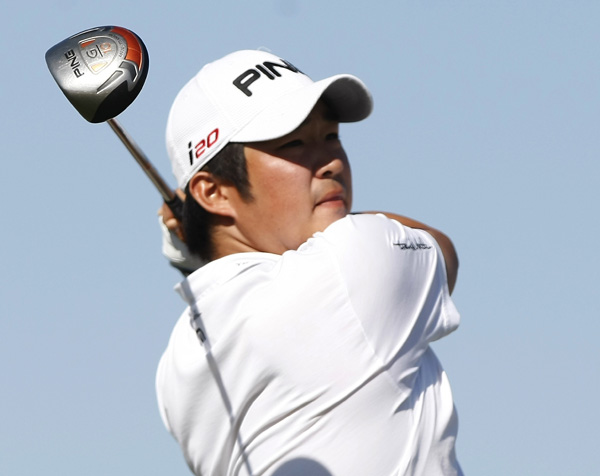 The 21-year-old Huh parred all eight holes in the playoff that matched the second-longest in PGA Tour history.

Huh closed with an 8-under 65 to match Allenby at 13-under 271 on the seaside El Camaleon course. Allenby had a two-stroke lead with a hole to play in regulation, but the 40-year-old Australian drove into the trees on the right and made a double bogey.

“Obviously, disappointed, disappointed that I didn’t like hit 3-wood off 18 in regulation, like I should have,’’ Allenby said. “But that’s the way it goes. You make some mistakes sometimes, and that was a major one, obviously.

“I mean, I had this tournament in the bag, a two-shot lead with one hole to play and just played it like a rookie, pretty much.’’

The playoff fell three holes short of the PGA Tour record of 11 set in the 1949 Motor City Open when Cary Middlecoff and Lloyd Mangrum were declared co-winners. The playoff was the fifth to go eight holes and first since the 1983 Phoenix Open.

The playoff alternated between the par-4 18th and par-3 10th.

It ended on No. 10 when Huh, seven strokes behind leader Daniel Summerhays after three rounds, chipped from the right rough to 2 1/2 feet and made his par putt. Allenby drove into the hazard on the right, chipped to 15 feet and missed his par try.

“I was nervous, especially when you’re playing out there against Robert Allenby,’’ Huh said. “I was trying to calm down myself, but it was hard.’’

The victory followed two strong performances last month when Huh tied for sixth at Torrey Pines and tied for 12th the following week in the Phoenix Open.

Matt Every and Colt Knost shot 66 to tie for third, two strokes back.

Chris Stroud was a stroke back entering the final hole, but also made a double bogey for a 71 to drop into a tie for fifth at 10 under with Summerhays, Dicky Pride and Alejandro Canizares. Summerhays closed with a 73, and Pride and Canizares shot 66.

Huh eagled the par-5 fifth and had six birdies in his bogey-free final round.

“The wind was different than the past three rounds, so I was trying to take advantage of that,’’ Huh said.

Allenby was trying to win for the first time on the PGA Tour since the 2001 Pennsylvania Classic, his fourth victory in a two-year span. He also won the Nedbank Challenge and Australian PGA in consecutive weeks late in 2009.

“I played so awesome all day,’’ Allenby said. “I mean, I did nothing wrong all day. I played great. I putted great. I hit the ball great. I did everything that I needed to do coming down the stretch and then to give it away at 18 is very, very disappointing.

“It wasn’t easy in the playoff as well. I struggled with my swing a little bit, but I was still mentally not quite there from the 18th hole anyway.

“But look, John’s a great player, and I played with him yesterday, and he’s got a great future and he’s a young guy, and you know, all the best to him.’’