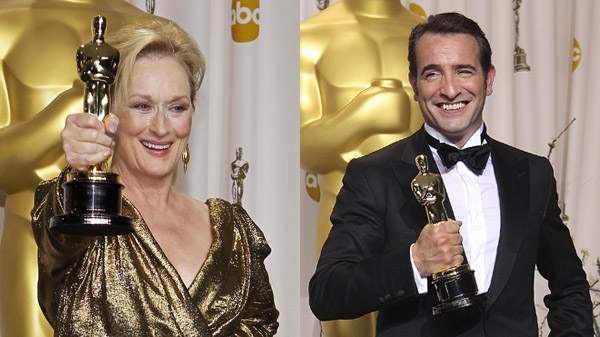 Left: Meryl Streep holds up her best actress Oscar for her role in “The Iron Lady.” [Reuters] Right: Jean Dujardin poses with his award for best actor for “The Artist.” [AP]

Among other prizes awarded Sunday for the black-and-white comic melodrama were best actor for Jean Dujardin and director for Michel Hazanavicius. 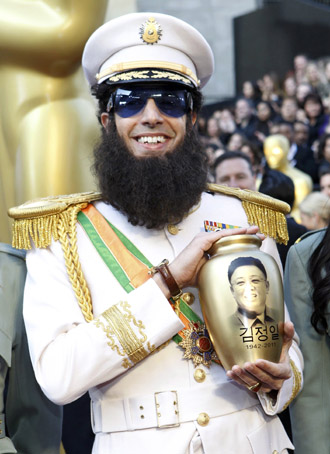 “The Artist” is the first silent winner since the World War I saga “Wings” was named outstanding picture at the first Oscars in 1929.

“I am the happiest director in the world,” Havanavicius said, thanking the cast, crew and canine co-star Uggie. “I also want to thank the financier, the crazy person who put money in the movie.”

The other wins for “The Artist” were musical score and art direction. Martin Scorsese’s Paris adventure “Hugo” also won five Oscars, all in technical categories.

Streep’s win was her first Oscar in 29 years, since she won best actress for “Sophie’s Choice.” She had lost 12 times in a row since then. Streep also has a supporting-actress Oscar for 1979’s “Kramer vs. Kramer.”

“When they called my name, I had this feeling I could hear half of America go, ‘Oh, no, why her again?’ But whatever,” Streep said, laughing.

“I really understand I’ll never be up here again. I really want to think all my colleagues, my friends. I look out here and I see my life before my eyes, my old friends, my new friends. Really, this is such a great honor, but the [thing] that counts the most with me is the friendship and the love and the sheer job we’ve shared making moves together.”

The “Ali G” “Borat” and “Bruno” star, who had been warned against staging a stunt at the Academy Awards, turned up in full military regalia from his latest movie “The Dictator,” and clutching a funeral urn bearing Kim’s photo.

Flanked by two female guards in uniforms and red berets, he told celebrity presenter Ryan Seacrest - interviewing all the stars as they arrived for the Oscars, and asking them about their outfits - that he was wearing Galliano.

“The socks are from Kmart,” he added and, when Seacrest reached down to pull up his trouser leg, said: “As Saddam Hussein once said to me, ‘Socks are socks, don’t waste money.’?”

Holding the urn with a picture of North Korea’s late leader on the front, he was asked why he was excited to come to the Oscars.

“It gave me an opportunity to bring my dear friend and doubles tennis partner Kim Jong-il,” Baron Cohen said in character.

“It was his dream to come to the Oscars, and to be sprinkled over the red carpet and over Halle Berry’s chest again,” he joked.

At that point, he pretended to lose his grip on the urn, pouring the ashes down the suit of a visibly annoyed Seacrest, and spilling them on the red carpet in front of banks of cameras.

Security guards appeared to pull him away, and as Seacrest continued to broadcast live, Baron Cohen could be seen in the background, berating the guards and demanding his urn.

At one point, he managed to tell Seacrest, who was covered in ashes: “If somebody asks you what you’re wearing, you say Kim Jong-Il.”