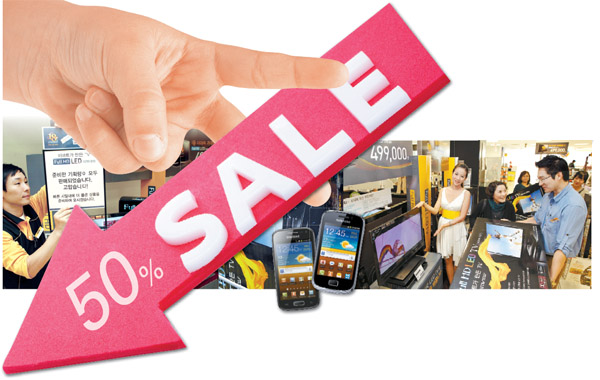 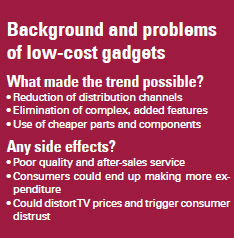 The rush began with large flat-screen TVs, moved on to smartphones and laptops, and then spilled over to hybrid cars and houses.

In most cases, discount store chains or online marketplaces join forces with small and mid-sized manufacturers to roll out the cheaper products, which have magnetized consumers who care more for functionality than fashionable or even recognizable brand names.

However, while critics see this is a fad or marketing gimmick that will disappear when the economy gets back to full health, even major corporations like Samsung Electronics and LG Electronics have shed their resistance and decided to jump on board, signaling that the “fever” is set to continue.

But there are concerns about the potentially negative side effects of the trend, such as consumers growing frustrated with what they claim are lower quality products that offer poorer after-sales service, which could lead to higher repair bills.

The Korea JoongAng Daily examines just what brought this low-cost rush to the Korean technology retail sector, and what we as consumers should bear in mind.

The following month, Homeplus made available a 22-inch set at the same price, in partnership with a Chinese manufacturer.

And last June, Lotte Mart upped the ante by releasing a larger 32-inch LCD TV for just 499,000 won, making it even more affordable than a new Samsung Galaxy smartphone or Apple tablet.

Four months later, E-Mart, the country’s top discount store, joined in by rolling out the same size set for the same price. The difference was that this was and LED TV rather than an LCD one.

The rest is history. Local online marketplaces such as Auction, Gmarket, Interpark and 11st have all jumped on the bandwagon, as have home shopping channels, as the public’s desire continues to grow for product prices that better reflect their worsening economic plight.

In fact, the response to the newly rolled-out products has been remarkable.

Last month, 11st sold all 500 of its 37-inch low-cost TVs in five minutes. That surpasses the two hours it took Lotte Mart to shift all 2,000 of its inventory in December, and marks a rapid acceleration since E-Mart needed two days - in itself, quite a feat - to get rid of its 5,000 discount TVs in October.

Manufacturers are now racing to migrate this pattern over to larger sets, with the trend already spreading into the 40-inch range. One Korean daily reported that the discounts effectively mean consumers can now expect to pay just 10,000 won an inch for their new TVs.

Industry observers said the combination of three relatively recent changes to the economic landscape formed a veritable “perfect storm” that paved the way for the downsized prices.

The first of these is high inflation, which Koreans have been battling for more than a year.

Korea’s Consumer Price Index rose 4 percent in 2011, hitting the upper ceiling of the Bank of Korea’s target band of between 2 percent and 4 percent. The government and the central bank have vowed to keep inflation within 3.3 percent this year.

“What is significant is that we’re easing the burden on consumers who buy home appliances in this time of rising consumer prices,” Jeong Jae-myeong, director of Auction’s digital home appliances unit, said when the site released its low-cost TV.

Also in recent months, Koreans’ distrust of Samsung and LG’s pricing strategies has escalated in the wake of media reports that their higher-end products are overpriced - in some cases due to collusion between the two.

One local newspaper claimed that a 55-inch Samsung TV cannot be bought for less than 2.91 million won at Danawa.com, a Korean online shopping site, while the same model goes for 2.37 million won on Amazon.com. It said a similar discrepancy can be found among LG TVs.

The daily also alleged other Korean-made electronic goods, such as refrigerators, smartphones and laptop computers, are being sold in Korea at prices between 10 percent and 20 percent higher on average than what they retail for in the U.S.

“Our price is the honest price,” said an E-Mart official. “We think the prices of Korean TVs will have to be adjusted [after this].”

Such news came after the Fair Trade Commission on Jan. 12 fined Samsung and LG a combined 44.64 billion won for fixing the prices of their key home appliance products. Samsung was fined 25.81 billion won and LG 18.83 billion won for rigging the prices of clothes washers, flat-screen TVs and laptops. The companies claimed they had done this out of fear that their profits would be eroded by the global financial crisis in 2008.

Additionally, consumers’ dissatisfaction with technology goods made by small and mid-sized manufacturers was higher in the past due to the frequency with which they malfunctioned, but has subsided in proportion to the products’ rising quality, observers say. Effective marketing campaigns also cemented their success.

Although lower-cost TVs have been met with a frenzied response, they still account for a relatively small share of the domestic market.

Market insiders say that about 2 million TVs are sold in the country each year, but that retailers and smaller manufacturers have sold just 40,000 of the cut-price sets since June at best, representing a mere 4 percent of the domestic market.

This could be set to change as Samsung and LG have finally bowed to the pressure and announced plans to release more affordable TVs as well. Both companies were initially quite vocal in their opposition to slashing their prices.

Havis Kwon, the president of LG’s home entertainment division, said in November that the company had taken a look at the E-Mart TVs and “come to the conclusion that the quality is fairly low.” He even went so far as to claim that people would regret buying one, while LG has described the quality of what is currently available on the market as “intolerable.”

Looking for some kind of compromise, both Samsung and LG are planning to roll out cheaper TVs in the first half of this year that are expected to be 100,000 won dearer than the discounted versions offered by their rivals.

Kim Hyun-suk, the executive vice president of Samsung’s visual display business unit, said earlier this month that the company will release a low-cost flat-screen TV within two months, adding that the product had finished passing through the stage of development.

Lee Ssang-su, an executive vice president at LG Electronics’ product planning department, said in January that it had plans to go commercial with the cut-price sets by June.

Now there is a sense of contagion as the trend spreads beyond the realm of TVs to consumer electronics in general.

In addition, Technology Land, an electronic goods discount store, joined forces with Chinese PC maker Lenovo to release a low-cost laptop that has been retailing for just 469,000 won since early last month.

Korean media have also reported on how other sectors, such as automobiles, are following suit and offering options with less frills to appease consumers. The so-called “smart version” of Hyundai’s Sonata hybrid discarded expensive accessories like the Sonata’s leather steering wheel to shave just over 1 million won off the price. A similar pattern can be found at housing auctions, where the sluggish market is forcing homeowners to sell up at discounts of up to 50 percent.

So just how were these businesses able to make such a dramatic cut to the prices of their flat-screen TVs?

“We were able to slash our prices because we were able to omit some steps in the retail chain,” said Kim Hak-jo, one of E-Mart’s consumer electronics managers. The key step was eliminating one of its middlemen, in the form of its import agency.

E-Mart chose Taiwan’s TPV as its manufacturing partner, a company E-Mart claims is the world No.1 in the global TV outsourcing market with a 20 percent share. Usually, E-Mart would rely on an agency to link up with TPV, but for its cheaper TV deals it is buying directly from the source, similar to how it purchased coffee directly from a Brazilian farm to facilitate its “half-priced coffee” promotion.

Meanwhile, Lotte Mart and 11st joined forces with Korean manufacturers Moneual and LDK, respectively, enabling them to save money as these firms lacked brand recognition, which meant that the TVs were sold under the retail companies’ private brands.

The partners also agreed from the early planning stages to eschew the more elaborate technologies and frills, assuming that consumers would be willing to forego 3-D functions, applications and video streaming capabilities to reap a bigger bargain. Insiders said that by eliminating the costs that go into these technologies, and by reducing expenditure on the user interface and outer design, they can cut costs by between 20 percent and 30 percent.

“Display manufacturers sell panels that do not meet the standards of their regular clients to other panel retailers in Korea and China, so if [discount stores] buy from them, they can reduce their costs,” said one executive at a Korean company that produces displays.

The cheaper panels are technically lower quality, but the difference is barely detectable by the naked eye, sources claim.

“The so-called B-rated panels don’t create any problems in terms of usage, but they are at least 20 percent, and at most 40 percent, cheaper than A-rated panels,” said one display panel expert.

The low-cost boom is also inspiring fears that it could trigger negative side effects, with after-sales policies of particular concern.

According to a Korean daily that specializes in the technology sector, 48 of 177 consumer reviews of a low-cost TV set being offered by one Korean discount store described it as “average” or “unsatisfactory.” Given that such reviews tend to be fairly generous and forgiving, the paper noted, this reflected a high level of dissatisfaction with the product.

“The TV comes with only two 3-watt speakers, so I have to crank up the volume to [a very high setting],” wrote one reviewer.

One technology sector source said, “The initial price may be cheap, but the ensuing costs for maintenance and repairs could become quite burdensome.”

A recent recall of 8,500 half-price bicycles by Lotte Mart shows the potential downside to relying on low-grade products to deliver results and perform as expected.

TV makers have also expressed concern that the rush for cheaper products could distort the wider market. In other words, while retailers may reap a one-time windfall, it could lead to consumers distrusting large TV makers and their products.