IU in the clear after hosting gaffe

IU in the clear after hosting gaffe 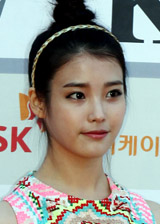 Singer IU called out the wrong name when announcing the No. 1 song on Sunday’s “K-Pop Countdown” on SBS, but got off without incident thanks to the graciousness of her fellow singers.
IU was hosting the show when she made the mistake of calling out the artist Se7en instead of the rightful winner of the night, FT Island. She became aware of the error instantly, fixed it and apologized.
Afterward, she used her Me2Day Web site to apologize to the two K-pop acts as well as the public.
“To viewers, FT Island and Se7en, I’m so sorry. I promise I won’t let this happen again,” she said. “I will maintain my focus until the end. Again, I’m so sorry.”
Meanwhile, FT Island and Se7en asked fans to cut IU some slack. Hong-gi from FT Island wrote on Twitter, “Please don’t put IU down. Se7en and I are both fine.”
Netizens have responded with words of consolation for the teenaged entertainer.
“It’s okay, as long as you don’t make the same mistake again,” one fan wrote, while another wrote, “Poor little darling. She must have been worried sick.”
Some netizens said that they were touched by both IU’s heartfelt apology and her fellow singers’ support.