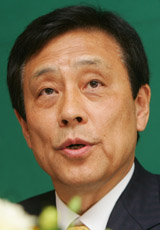 Hana Financial said yesterday that the head of its flagship lender has been tapped as its next chairman.

A Hana Financial Group spokesperson confirmed that the group’s nomination committee named Kim Jung-tai, the current president and CEO of Hana Bank, as the most qualified person to lead the holding company in the future.

Kim is expected to be recommended to the board of directors as the sole candidate for the chairmanship early next month. The appointment will be finalized during the group’s general shareholders’ meeting, which is set for March 23.

“I will do my best to play the role of a helper, who can steer Hana Financial in the right direction and also aid employees to perform to the best of their ability,” Kim said yesterday.

Kim, whose colleagues say he constantly foregrounds the importance of communication, started his career by working for Seoul and Shinhan banks in the 1980’s, before helping establish Hana Bank in 1992.

He was vice president of Hana Financial Group and head of Hana Daetoo Securities before being named as the CEO of Hana Bank in 2008.

Once approved, the new chief will take over from Chairman Kim Seung-yu at a critical time, as Hana is pushing to raise its profile in the financial market with the acquisition of Korea Exchange Bank, Korea’s fifth-largest lender.

Early this month, Hana Financial Group became the second-largest banking group by assets as it wrapped up the takeover of a combined 57.27 percent stake in KEB for 4.4 trillion won ($3.9 billion) from U.S. buyout fund Lone Star and the state-run Export-Import Bank of Korea.

Kim Seung-yu, who spearheaded the lengthy acquisition process, insisted on leaving his post after his current term is over, despite being the favorite among board members to run the banking group for another term.

Kim, who will take a back seat in all major roles in the group, recently told the JoongAng Ilbo that he “will not be an honorary chairman nor sit on the board.”

However, officials within Hana Financial expect he will remain as a senior advisor to the next chairman to help ease the transition process and help with the integration of KEB.