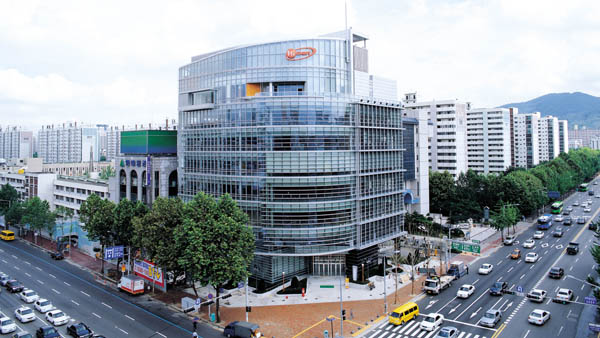 Hi-Mart’s headquarters in Daechi-dong, southern Seoul. Eugene Group, the largest shareholder of Hi-Mart, announced yesterday that it will postpone selling the nation’s largest electronics appliance retailer as it awaits the results of the prosecution’s investigation into Hi-Mart executives. Provided by the company

Eugene Group decided yesterday to delay selling its stake in Hi-Mart after learning that prosecutors are investigating Sun Jong-koo, founder and CEO of the electronic appliance retailer, as well as other senior-ranking executives on allegations of embezzlement.

A 62.25 percent stake of Hi-Mart is up for sale, which is the combined share owned by Eugene Group, founder Sun and the Hi Consortium. 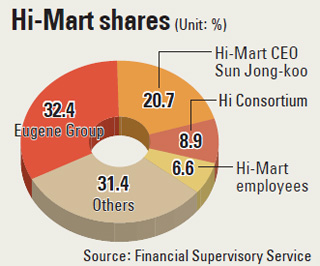 The decision comes shortly after officials at Eugene Group and Citi Group Global Markets, which is advising on the sale, met yesterday afternoon to discuss how they should proceed in light of the probe.

They also discussed whether they should postpone the deadline for accepting letters of intent (LOI) from interested parties, which was originally scheduled for this Friday.

Eugene initially planned to pick a preferred bidder as early the end of next month, but delays have become unavoidable due to yesterday’s decision.

“The group’s intention to sell Hi-Mart has not changed,” said Kwon Hyeong-jin, a public relations official at Eugene Group. “A detailed schedule for the sale will be announced later.”

Some market watchers said the investigation may cause the sale to collapse after prosecutors raided Hi-Mart’s headquarters in Daechi-dong, southern Seoul, last weekend, as well as Sun’s house. They are looking into allegations that Sun and his colleagues embezzled over 100 billion won ($88.5 million) of company funds and transferred them to overseas bank accounts.

Meanwhile, Lotte, Shinsegae and Homeplus, all of which have expressed interest in taking over Hi-Mart, began distancing themselves from the deal. Officials at the three chain stores said they will decide later whether to participate in the bid after closely monitoring developments.

Until last weekend, Hi-Mart, Korea’s largest home appliance seller, was seen as an attractive choice for retailers eager to expand into electronics appliances. It raised 3.4 trillion won last year, up 11.8 percent from 2010, and currently runs 305 outlets.

“If Hi-Mart loses its standing and reputation because of the probe, we will certainly reconsider whether we are interested in buying it,” said an official at Lotte, who asked not to be named.

Until the news of probe broke out, Lotte was not shy about broadcasting its belief in the solid benefits that could be achieved by combining Hi-Mart’s strengths with its own, especially as Hi-Mart’s outlets tend to occupy prime locations.

Homeplus officials were also hedging their bets on the sale until the probe wraps up.

“Who would want to acquire the company if it turns out that its funds were leaked outside?” said a Homeplus official, also requesting anonymity.

Shares of Eugene Corporation and Hi-Mart tumbled during trading hours yesterday. Hi-Mart’s shares closed at 64,300 won, down 14.95 percent from the previous day, and Eugene fell 14.92 percent to 4,960 won as investors feared the probe could weaken the value of the two companies.

Both Eugene Group and Hi-Mart founder and CEO Sun agreed to sell their controlling stake last year after the two sides became embroiled in disputes over how the retailer was managed.

An industry source who asked not to be named said the outlook for the sale looks grim as investors question the company’s transparency.