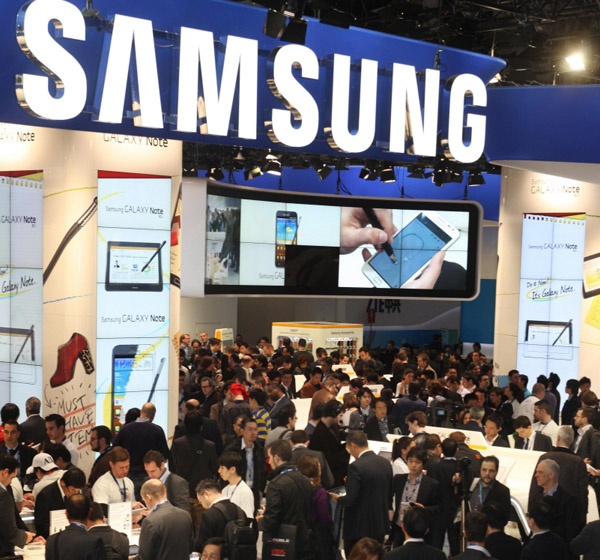 Samsung Electronics’ booth at the Mobile World Congress (MWC) in Barcelona, Spain, draws a huge crowd on Sunday. The nation’s No. 1 electronics maker unveiled a new version of the Galaxy Note, called the Samsung Galaxy Note 10.1, and is slated to introduce a new addition to its smartphone product lineup in the form of its Galaxy Beam.Provided by the company


BARCELONA, Spain - Mobile phone manufacturers and carriers from around the world showed off their latest products and services at the Mobile World Congress (MWC), the world’s largest telecom fair that kicked off its four-day run here yesterday.

SK Telecom and KT, Korea’s No.1 and No.2 mobile carriers, were more focused on exhibiting how better connected people can be nowadays. 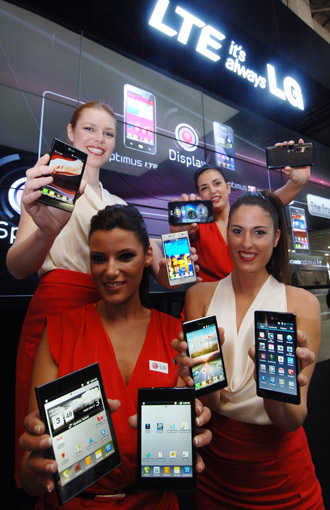 Samsung Electronics’ booth at the Mobile World Congress (MWC) in Barcelona, Spain, draws a huge crowd on Sunday. The nation’s No. 1 electronics maker unveiled a new version of the Galaxy Note, called the Samsung Galaxy Note 10.1, and is slated to introduce a new addition to its smartphone product lineup in the form of its Galaxy Beam.Provided by the company

KT set up a “Connected House” at the fair after joining forces with other telecom companies such as the AT&T of the U.S. It demonstrated 13 future-oriented technologies including its second-generation Kibot educational robot and smartphone-controlled door system.

MWC is an annual telecom fair organized by the Global System for Mobile Communication Association, an association of around 1,000 mobile operators, handset manufactures and equipment providers from over 210 countries. This year’s MWC is expected to attract over 60,000 visitors.

Critics claim that companies this year are more focused on showing how existing devices can be applied in different ways, rather than competitively exhibiting the latest and hottest hardware technologies that raise the bar in the industry.

“Last year, companies were in a rush to showcase dual-core phones. But at this year’s MWC, even though the technology for quad-core phones is available, companies seem more interested in extending the way in which smart devices can be used,” said a Samsung Electronics official.

Such is the case with Samsung Electronics, which saved the third-generation Galaxy S smartphone for a later occasion. Instead, it released the new Galaxy Note 10.1, which is almost twice the size of the previous 5.3 inch version, and the Galaxy Beam smartphone, which has an inbuilt projector that enables the user to display the smartphone screen on any high-definition surface at a range of up to 50 inches.

Some industry observers said Samsung is deliberately keeping its cards close to its chest so as not to give its rivals a chance to catch up, noting that its U.S. archrival Apple does not take part in the trade show.

The two smartphone giants have been engaged in legal tussles in various countries around the world as they accuse each other of copying design and technology patents.

It is a different story for LG Electronics, though.

The company’s smartphone business has been struggling lately, meaning that it does not have the luxury of taking a breather and adopting a wait-and-see approach at this year’s MWC, unlike Samsung.

LG is hoping that two of its devices will be showstoppers at the event: the Optimus Vu, its stylus-based phone/tablet hybrid, and the Optimus 4X HD, a quad-core phone.

“Memo and note-taking functions have become much more important for smart devices, and that is what prompted us to roll out a stylus-based phone for the first time in three years,” an LG official said, emphasizing that the company’s stylus is based on homegrown technology, whereas Samsung’s is Japanese. LG added that its stylus is also smoother and quieter.

LG is moving more aggressively in response to ramped up market competition. According to data by market researcher Gartner, Chinese handset maker ZTE replaced LG Electronics as the world’s third largest handset vendor based on units sold in the fourth quarter of last year for the first time. Nokia is No. 1 and Samsung No. 2.

In fact, many world media are paying close attention to ZTE this week. It has unveiled eight new devices at MWC, including several that work on multi-core chipsets and the fourth-generation (4G) Long Term Evolution (LTE) network. The company said in a press release that it hopes to become one of the top three handset providers by 2015.

No reconciliation with Apple

J.K. Shin, president of Samsung’s mobile business unit, said Samsung has no plans to compromise with Apple on their ongoing patent disputes.

“There is [not much chance] of us finding a compromise [with Apple],” Shin said. “We are using all of our capabilities to protect our business and respond [to attacks] more actively than we did in the past. That will not change.” Shin added that quad-core smartphones will be the next big thing in this business sector.

“With quad-core phones, we will be able to use the Internet and enjoy multimedia on smartphones and tablet computers exactly like we do on PCs,” he said. But he declined to provide details on whether Samsung’s Galaxy S III smartphone will use this technology, or when quad-core phones will go into mass production.

Park Jong-seok, the head of LG’s mobile communications division, said LG will become the world’s No.1 player in the 4G LTE market this year by moving faster than its rivals in penetrating regions like Europe, Asia, the Middle East and Russia.